Everything about Jackie Gleason was big: his huge talent, his outsized personality, and his expansive waist line.  Even his grave, which we visited when we were in Miami. (June Taylor, best known as the founder of the June Taylor Dancers who appeared on The Great One’s show, is buried close to Jackie’soutdoor mausoleum.)

Even bigger was The Jackie Gleason Show, his successful TV Variety show, taped in color from his hometown of Miami Beach from 1966 to 1970.  Tomorrow, Time Life releases the inaugural DVD release of Jackie’s show, one of the ’60s most beloved programs . . . . and unseen for nearly 50 years! (The master tapes had resided in a vault in South Florida until now.) 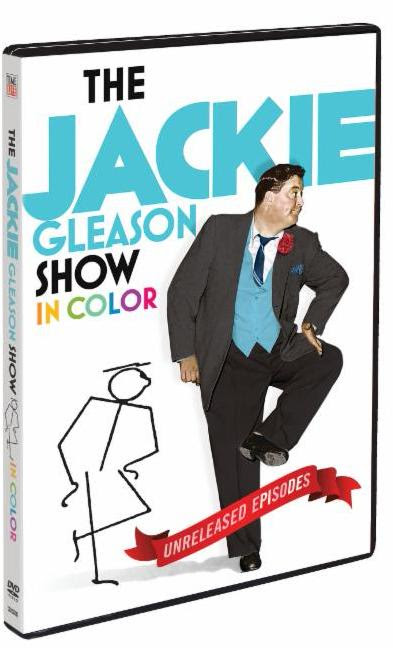 Gleason was everyone’s working-class hero, and his smash-hit show delivered an hour of non-stop entertainment every single week.  Enthralled home audiences were treated to entertainment of the highest order, singing, dancing, hilarious comedy and Jackie at his very best as Ralph Kramden and on stage with all his famous friends, including Milton Berle, Red Buttons, George Carlin, Nipsey Russell, Phil Silvers.  The single disc features four never-before-released, remastered episodes of the show including three unreleased Honeymooners sketches, all unseen for more than 50 years!

The Jackie Gleason Show had been broadcast live and later taped in New York City since 1952, but in 1964, Gleason wanted to be based where he could play golf all year round.  Hank Meyer, a longtime South Florida publicist, knew just the spot and convinced Jackie to bring his show to Miami Beach, the sun and fun capital of the world.  However, back in the ’60s, it was a novel undertaking to broadcast from Miami Beach, and more than a hundred families relocated to stay with the show.  Plus, there was barely any production infrastructure in South Florida, which all had to be created by Jackie and his team.  It paid off and the revamped show was a huge success.

The Jackie Gleason Show delivered, Ralph Kramden, Gleason’s most indelible and legendary creation, as well as an unforgettable gallery of characters he himself created and fine-tuned. Most memorably, Gleason and Art Carney revived their Honeymooners roles, with Sheila MacRae and Jane Kean added as the new Alice and Trixie, all presented in glorious color for the first time.
So cue the travelin’ music and heed the big man’s message before he glides offstage: “And awaaay we go!”