Some say Ethan Hawke was Born to Be Blue. Of sorts. Hawke portrays (quite wonderfully) jazz legend Chet Baker in Born to Be Blue (IFC Films). In the ’50s, Baker was one of the most famous trumpeters in the world, renowned as both a pioneer of the West Coast jazz scene and an icon of cool. By the ’60s, he was all but washed up, his life in shambles due to years of heroin addiction. In his innovative anti-biopic, director Robert Budreau zeroes in on Baker’s life at a key moment in the ’60s as the musician attempts a hard-fought comeback, spurred by a passionate romance with a new flame (portrayed by Carmen Ejogo). 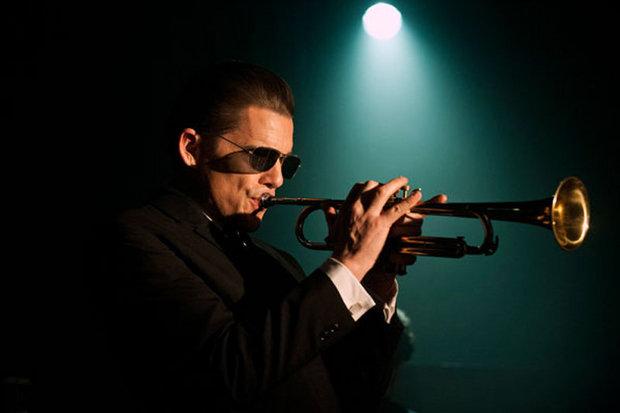 “I didn’t want some pretend jazz movie in a black turtleneck,” says Hawke. “To me, it’s about the music, the person, the period, the place. Look at the nineteen fifties–they have their own charisma and feel, from the cars to the music to the energy. I find it all tying together to create this special time.”

Time was not Baker’s friend.  Hooked on heroin in 1957, his career died after Baker was involved in a drug deal gone so wrong a brutal beating knocked his teeth out. He couldn’t play anymore,” adds Hawke, “until he learned to play with dentures.”

Sink your teeth into a great flick.

It only takes one voice to change history. Let’s discuss Anita Hill and her powerful voice.
In July 1991, President George H.W. Bush nominated Judge Clarence Thomas to fill Justice Thurgood Marshall’s seat on the U.S. Supreme Court. In October, during the final days of Thomas’ confirmation hearings before the Senate Judiciary Committee, both Newsday and NPR broke the story that one of Thomas’ former employees, law professor Anita Hill, had accused him of sexually harassing her 10 years earlier. These revelations triggered a maelstrom of events, with both Hill and Thomas testifying about the allegations before a stunned and riveted television audience.

History has been revisited in the HBO Home Entertainment TV movie Confirmation, now on DVD with Digital HD and Blu-ray with Digital HD. The film details the explosive Clarence Thomas Supreme Court nomination hearings, which brought the country to a standstill and forever changed the way we think about sexual harassment, victims’ rights and modern-day race relations. It looks behind the curtain of Washington politics, depicting a pivotal moment in American culture that became a turning point in workplace equality and gender politics.

The HBO Film was nominated for two 2016 Emmy Awards including Outstanding Television Movie and Outstanding Lead Actress in a Limited Series or Movie (Kerry Washington as Anita Hill).

The Blu-ray and DVD releases include brief discussions with Washington and Pierce on the historical impact of the hearings as well as “Character Spot” featuring cast members discussing the character they play.

“Until justice is blind to color, until education is unaware of race, until opportunity is unconcerned with the color of men’s skins, emancipation will be a proclamation, but not a fact.” – Lyndon B. Johnson
Yes, Hillary will win, but put aside that lovely thought . . . just for a moment. As race relations and presidential politics continue to be top-of-mind, hot-button issues, HBO will be bring the Emmy-nominated All the Way to Blu-ray and DVD on September 6. Recently nominated for eight Emmy Awards, including Outstanding Television Movie and Outstanding Lead Actor in a Limited Series or Movie (Bryan Cranston, who reprises his Tony-winning role), the powerful film underscores the fact that as much as things change, they remain the same.
All the Way is a riveting behind-the-scenes look at President Lyndon B. Johnson’s tumultuous first year in office in the wake of President Kennedy’s assassination. Witness LBJ during his early administration, as he stakes his presidency on what would be an historic, unprecedented Civil Rights Act. Johnson finds himself caught between the moral imperative of Dr. Martin Luther King, Jr. and the expectations of the southern Democratic Party leaders who brought Johnson to power. As King battles to press Johnson while controlling more radical elements of the Civil Rights movement, Johnson navigates the bill through Congress, winning a landslide victory against Barry Goldwater, but causing the South to defect from the Democratic Party.

There’s something funny about Justin Bieber. We’ll star with this bon mot: He has no talent. On the other hand, Andy Samberg is funny. In Popstar: Never Stop Never Stopping , a mockumentary  about a former boy-band member trying desperately to salvage his failing solo career (think Bieber), he is fucking funny. If you miss the flick in your local theatre, the film comes to Digital HD on August 16, On Demand on August 30, and Blu-ray and DVD on September 13. You can thank Universal Pictures Home Entertainment for this side-splitting comedy.

We won’t give away too much, but Popstar: Never Stop Never Stopping goes behind the scenes as music sensation Conner4Real (Samberg), the breakout star of a popular but disbanded hip-hop group, finds his popularity plummeting after a disastrous album release, leaving his fans, sycophants and rivals all wondering what to do when he’s no longer the dopest star of all . . just as he launches a highly publicized solo tour.

It’s funny because SNL alums Andy Samberg, Akiva Schaffer and Jorma Taccone (the comedy collective known as The Lonely Island) wrote the screenplay, a razor-sharp, music-filled send-up of pop celebrity chronicles the exploits of the lovably egotistical singer-rapper (and his 32-person entourage) as he attempts to win back the hearts of his once-adoring fans. The trio also produced the film, along with comedy mastermind Judd Apatow.

Could this be the life story of Bieber? Never say never.

He was crowned with so many titles:  “Sexiest Man Alive,” “American Royalty,” “Heir to Camelot,”  “America’s Son,”  “Editor in Chief”. How do you remember John F. Kennedy, who scorned being called John John? The son of Jackie O? The little boy who saluted his father’s funeral procession? The hunky man whose plan plunged crashed into the Atlantic Ocean off the coast of Martha’s Vineyard, killing himself, his wife Carolyn Bessette and her sister Lauren?

Now John Kennedy Jr. comes back to life in the original documentary film, I Am JFK Jr., an intimate, revealing and poignant look at his life in and out of the spotlight. Network Entertainment and Spike TV delve into the compelling life of John F. Kennedy Jr. through the distinctive lens of many of the people who knew him best, from A-list celebrities to close friends and staffers who worked closely with him at George magazine. I Am JFK Jr. (Virgil Films) comes to Digital HD on August 2, followed by a DVD release release on August 12.

The White House was the first home John knew. The son of President John F. Kennedy and Jacqueline Bouvier Kennedy grew up in the public spotlight. When the world witnessed the moment the adorable 3-year-old JFK Jr. saluted his fallen father, the image was seared into the nation’s collective memory.
John F. Kennedy Jr. was considered by many to be “America’s Prince”. Despite living under the media microscope for his entire life, JFK Jr. forged his own successful career – from serving as the Assistant District Attorney of New York to launching the glossy political magazine, George.  Featuring exclusive interviews from a wide array of friends and former colleagues, I Am JFK Jr. is an engrossing look at the person behind the tabloid fodder featuring untold stories that for the first time, will give viewers a true sense of the real JFK Jr.

Michael Reagan and author Doug Wead talk about the difficulties and strange destinies of presidential children, actor Kristoffer Polaha talks about the man he would one day play on screen, while authors Christopher Andersen and Laurence Leamer offer background on the life of America’s most famous family.
In addition to personal photos from John’s closest friends, the film features vintage footage of young JFK Jr. in the White House, with his family, and rare views of him in the years after his father’s assassination. I Am JFK Jr. tells the story of a young man pegged for greatness yet determined to be good,  a story that ended way too soon.

Zika? Spread the word that another epidemic is coming.

Teenage sisters Emma and Stacey live a normal life . . . until their small suburban neighborhood is stricken with a mysterious parasitic virus. As the disease rapidly spreads throughout the town, the two band together to barricade themselves from infection. But it may already be too late–when the virus enters their home, the sisters are faced with an impossible choice: protect each other or survive the virus.

Broken heart? Romantic ruckus? Learn to believe in love again with The Perfect Match, which has just been released on Blu-ray (plus Digital HD), DVD (plus Digital), Digital HD and On Demand from Lionsgate.

Charlie (Terrence J) is a bachelor who’s convinced that relationships are dead despite attempts by his therapist sister (Paula Patton) and his friends to tell him otherwise. On a bet, he decides to stay with one woman for one month to prove that he is immune to love. Soon, he meets the beautiful and mysterious Eva (Cassie Ventura) and coaxes her into a casual affair. But as Charlie spends more time with Eva, he begins to question whether he may actually want more than just a one-night-stand.

The Perfect Match home entertainment release comes loaded with hilarious special features, including audio commentary with the cast and crew, two behind-the-scenes featurettes and a compilation of footage too fun to leave out.

Remember the exciting plot? An immortal Scottish swordsman must confront the last of his immortal opponents, a murderously brutal barbarian who lusts for the fabled “Prize.”

Experience Highlander like you’ve never seen it before with the 30th anniversary edition arriving on Blu-ray and DVD September 27 from Lionsgate. This edition features never-before-seen interviews with director Russell Mulcahy and Lambert (as well as an archival interview with R.M.) , a brand-new “making of” documentary, deleted scenes and audio commentary with director Mulcahy.

We’ve always known that August brings the dog days of summer, but we never knew they could be so, well, fetching.

On August 30, Air Bud Entertainment, the creators of Air Bud and Disney Air Buddies franchises, will release Pup Star, a canine-crammed spin on America’s hit TV singing competitions.  Loaded with music, including 13 original songs and the biggest cast of talking (and singing) pooches ever assembled, the all-new family film is the inspirational adventure of an adorable Yorkie pup, Tiny (voiced by Kaitlyn Maher), who finds herself on an action-packed cross-country journey to compete in the ultimate singing competition for dogs.

After she earns a place in the finale, Tiny is suddenly dog-napped! But with the help of her new friend, Charlie, a retired rock-and-roller, she escapes. Together they leave on an incredible journey through some of music’s most iconic cities. On the way to the competition they meet Big Ears—a soulful Basset Hound who teaches Tiny to belt out the  blues; Murray—a spiritual shaggy dog who helps her find her inner rhythm; and Emily Rose—a country-singing shepherd who helps her learn to sing from her heart. Most important of all, they all encourage Tiny to believe in herself and never give up on her dreams!

You can start barking the raves when the flick is released in select U.S. theaters and Digital HD exclusively on Fandango’s premium on-demand video service, FandangoNOW (FandangoNOW.com).  In Canada, the film will release September 17 (my bark-day) exclusively in Cineplex Cinemas as part of the complimentary “Family Favourites Premiere” programming with an additional special movie offer at the Cineplex Stores. The cat’s meow can be pre-ordered on FandangoNOW for $9.99 at fandangonow.com/pupstar.

We hear a sequel is already in the works!