Salka Viertel was once the highest paid writer on the MGM lot. She was also Greta Garbo’s lover, for whom she wrote five films.  A side note: So close were they that Viertel  bought a house next door to Garbo; when in 1969 Viertel  published her “autobiography” The Kindness of Strangers, she revealed their true relationship. Garbo never spoke to her again, avoiding her on the streets of New York City.

For the scores of wartime refugees fleeing persecution under Hitler she opened her doors to, Viertel was a lifeline. A courageous woman with a fascinating life and an incalculable impact on the lives of others, she has been long overdue for her moment in the spotlight.

So we can thank Donna Rifkind, whose biography, The Sun and Her Stars: Salka Viertel and Hitler’s Exiles in the Golden Age of Hollywood(Other Press, $30) shines a light on this remarkable story. 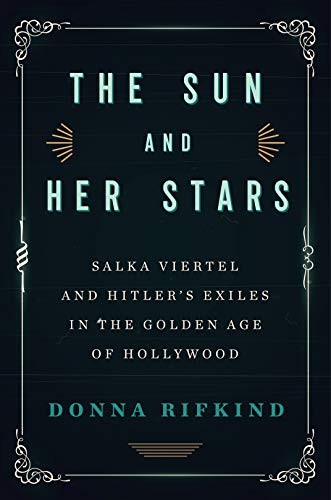 Actress-turned-screenwriter (Viertel declared herself  “neither beautiful nor young enough” to be a movie star), she left Berlin for Hollywood in 1928, bringing with her the bohemian spirit of the Weimar era. She would work with the luminaries of Hollywood’s Golden Age, including George Cukor, Irving Thalberg and David O. Selznick. At her house in Santa Monica she opened her door on Sunday afternoons to scores of European émigrés who had fled from Hitler—such as Thomas Mann, Bertolt Brecht and Arnold Schoenberg—along with every kind of Hollywood star, from Charlie Chaplin to Shelley Winters. In the living room (the only one in town with comfortable armchairs, said one Hollywood insider), countless cinematic, theatrical, and musical partnerships were born. As Nazi domination grew in Europe, Viertel poured herself into the refugee cause, arranging for jobs and affidavits for Jews and anti-fascists seeking safety in America.

If Viertel’s name has been largely forgotten in America, it is because too few people believed what she accomplished was important. Now, alongside our current moment’s interest  in recovering historically-overlooked women’s creative contributions, investigating women’s ability to survive and flourish in sexist Hollywood, and considering the moral obligations of Americans to displaced people in a world undergoing a vast refugee crisis, the questions Salka asked herself in the ’30s and ’40s about how one should live—and the answers her life exemplified—are as vital as ever.

It’s impossible to understand the true history of Hollywood without knowing the story of the dramatic, courageous figure of Salka Viertel and her rescue mission.