Since his first appearance in 1924, Winnie-the-Pooh has become a beloved household name. Created by A.A. Milne, Winnie the Pooh Bear was illustrated from the start by E.H. Shepard; the two of them had an unusual partnership for the time, in that their books were very much a collaboration between author and illustrator. While the Winnie-the-Pooh books have never been out of print, the story of how the images of the much-loved bear—and his friends—came to be has remained largely untold.

We were delighted to find and read The Art of Winnie-the-Pooh: How E.H. Shepard Illustrated an Icon (Harper Design, $29.99), James Campbell offers a thorough account of the origins and development of the characters who populate the Hundred Acre Wood, complete with more than 125 images, many of which have never been published before—including previously unseen sketches, the first illustrations of Pooh, finished artwork, personal family photographs, and memorabilia. The husband of Shepard’s great-granddaughter, Campbell has overseen the artist’s estate for years, and is uniquely qualified to offer just such a deep dive into his iconic characters. 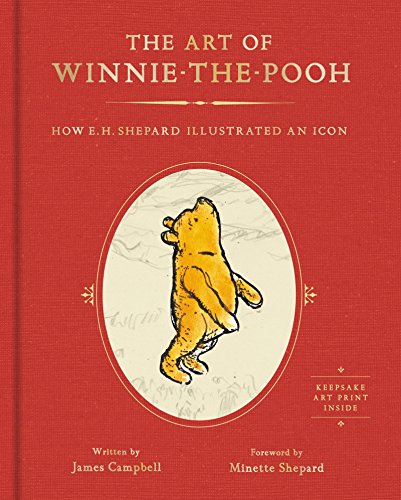 Campbell takes us back to the early days of Shepard’s friendship and collaboration with Milne, and Winnie-the-Pooh’s first appearance alongside a poem in Punch magazine. He traces the history back to the initial inspirations—the real Christopher Robin’s own teddy bear was the first model for Pooh, but was deemed too threatening, so Shepard turned to his own son’s teddy named Growler, which quickly resulted in the more cuddly, charming bear we know today.

Campbell details the collaboration between Milne and Shepard on the four Winnie-the-Pooh books—When We Were Very Young, Winnie-the-Pooh, Now We Are Six, and The House on Pooh Corner—and the real-life toy inspirations for characters like Piglet, Eeyore, Kanga, and Roo. Even after Milne stopped writing about Pooh in 1928, Shepard continued to provide new illustrations for franchised projects; and he went on to draw, color, and illustrate new editions of the four books for the rest of his life.

In addition to the beautiful illustrations throughout, The Art of Winnie-the-Pooh features a keepsake art print and a foreword by E.H. Shepard’s granddaughter, Minette Hunt. With Disney’s feature film Christopher Robin coming this summer, there’s sure to be a renewed interest in the classic characters, and this book is a perfect collector’s item for the many fans of Winnie-the-Pooh and his friends.