The award-winning urbanist’s new book, New York, New York, New York: Four Decades of Success, Excess, and Transformation (Simon & Schuster, $30)  is a  sweeping historical account of the Big Apple’s metamorphosis from the ’70s to today. It’s an immersive, thrilling ride into the excesses and underbelly of New York’s high and low society, as well as a fascinating, often surprising study of how the city became what it is today—for better (the stronger economy, cleaner public spaces) or worse (gentrification, police brutality).

This metamorphosis, shows it wasn’t the work of a single policy, mastermind, or economic theory, nor was it a morality tale of gentrification or crime. Instead, three New Yorks evolved in turn. After brutal retrenchment came the dazzling Koch Renaissance and the Dinkins years that left the city’s liberal traditions battered but laid the foundation for the safe streets and dotcom excess of Giuliani’s Reformation in the ’90s.

Then the planes hit on 9/11. The shaky city handed itself over to Bloomberg who merged City Hall into his personal empire, launching its Reimagination. From Hip Hop crews to Wall Street bankers, D.V. to Jay-Z, Dyja weaves New Yorkers famous, infamous, and unknown—Yuppies, hipsters, tech nerds, and artists; community organizers and the immigrants who made this a truly global place—into a narrative of a city creating ways of life that would ultimately change cities everywhere. 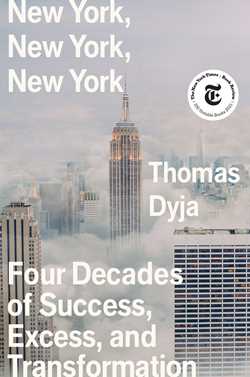 With great success, though, came grave mistakes. The urbanism that reclaimed public space became a means of control, the police who made streets safe became an occupying army, technology went from a means to the end. Now, as anxiety fills New Yorker’s hearts and empties its public spaces, it’s clear that what brought the city back—proximity, density, and human exchange—are what sent Covid-19 burning through its streets, and the price of order has come due. A fourth evolution is happening and we must understand that the greatest challenge ahead is the one New York failed in the first three: The cures must not be worse than the disease.

A combination of Ed Glaeser’s Triumph of the City and Tom Wolfe’s Bonfire of the Vanities, Dyja highlights the New Yorkers who made this city a de facto capital of the world: from Hip Hop crews to Wall Street bankers; from D.V. to Jay-Z; from Tina Brown, Warhol, Woody Allen, Trump, and Bloomberg, to hipsters, community organizers, immigrants, and more. In a starred review, Booklist’s hails it as, “a gutsy chronicle of a world-shaping city and humanity itself in all its paradoxical wonder.” NYT-bestselling author Kurt Andersen says “alongside E.B. White’s Here Is New York, Jane Jacobs’ The Death and Life of Great American Cities, Robert Caro’s The Power Broker, and Luc Sante’s Low Life on my short shelf of essential books about America’s greatest urban place now goes Thomas Dyja’s splendid New York, New York, New York.” How did 9/11 and the AIDS crisis transform NYC? And what will be the aftermath of Covid-19? Dyja is a key expert for the city’s next transformation.