Remember the controversy? The first photo of Scarlett Johansson as Major Motoko Kusanagi in the film Ghost in the Shell [below] was released and fans and fanatics cried that the casting of the live-action adaptation of Masamune Shirow’s manga series was “another Hollywood whitewashing incident.” Steve Paul, one of the flick’s producers left his shell and  promised “everybody is going to end up being really happy with it,  when they see what we’ve actually done with it. I don’t think anybody’s going to be disappointed.”

You decide now that Ghost in the Shell is available on 4K Ultra HD, Blu-ray 3D and Blu-ray Combo Packs from Paranount Home Entertainment.

Manga maniacs know the story: Major (Johansson), who believes she was rescued from near death. The first of her kind, Major is a human mind inside an artificial body designed to fight the war against cyber-crime. While investigating a dangerous criminal, Major makes a shocking discovery . . .  the corporation that created her lied about her past life in order to control her. Unsure what to
believe, Major will stop at nothing to unravel the mystery of her true identity and exact revenge. 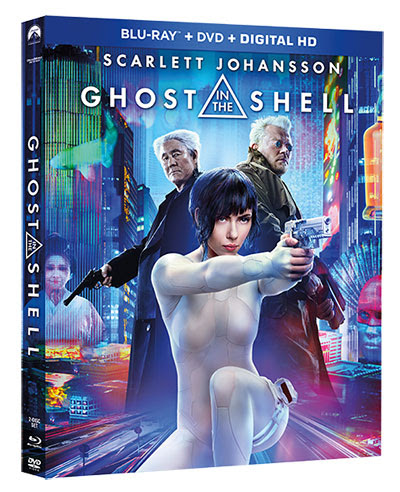 Says Scarlett: “I think when you have a character that’s so beloved, people have a lot of opinions about these characters that they love and grew up with and are inspired by and so forth. I try to kind of clean the slate and really follow my instincts with the character and hope that I give the character as much integrity as people expect,. Bringing these pages to life is a kind of challenge. Because you can’t rip it off the page, it’s totally different. You’re playing it as a–it’s not really a person, but it’s a human brain, it’s someone who’s having this life experience. Which is very different from just ripping stuff off from the manga.”