“Just cause you got the monkey off your back doesn’t mean the circus has left town.”

So said George Carlin, one of thousands of memorable one-liners. 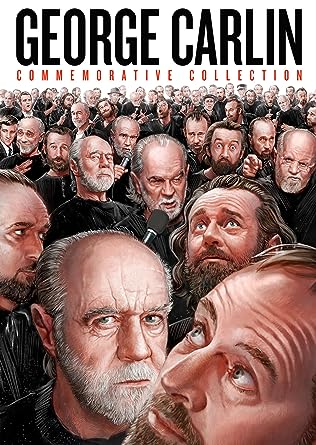 “While digging around in dad’s stuff, we found a few gems that we just couldn’t keep for ourselves,” says George Carlin’s daughter, Kelly, who helped compile material for the set commented. “ It’s amazing to think that ten years after his death, we keep finding stuff I’d never seen before!”

Carlin was not only one of America’s greatest comedians whose albums topped the charts, he was a pioneer of cable TV’s concert format that has become a benchmark of success for all humorists ever since.

And now, all of Carlin’s pointed, often controversial but always hilarious specials originally shown on HBO have been gathered for the first time in the George Carlin Commemorative Collection. Encompassing over five decades of his groundbreaking career, all 14 of the legendary funnyman’s Emmy nominated HBO specials are now available in one package–a remarkable set that also contains a previously unreleased HBO special entitled 40 Years of Comedy hosted by Jon Stewart plus Carlin’s posthumous audio release, I Kinda Like It When a Lotta People Die.

One of the key bonus pieces of material is Carlin’s first stand-up special from 1973, The Real George Carlin which has not been seen since it first aired. Additional bonus material includes APT 2C (a never-aired HBO pilot from the ’80s) plus two one-hour stand-up comedy club performances that features material performed by Carlin for the first time.  There is also never-before-released material from the 1960s–when Carlin was a clean-cut, suit-wearing guest on the variety shows such as Talent Scouts, The Jackie Gleason Show and Hollywood Palace.

The box set features also includes both DVD and Blu-ray discs of the HBO specials Life Is Worth Losing and It’s Bad for Ya plus liner notes written by comedian Patton Oswalt.

Carlin, a fearless commentator on society and a champion of free speech, now finally gets the boxed set he and fans of great, enduring comedy deserve and the set represents the most complete collection of Carlin performances to date.