You gotta love any film with a title more catchy that Jesse James Meets Frankenstein’s Daughter, the 1966 low-budget western/horror hybrid.
And we found it: Ghost Killers Vs Bloody Mary.
You gotta wait until March 10 when Dark Sky Films unleashes the gem.
And we loved it much more than Jesse and Frank’s daughter.
Looking for an easy way to internet stardom, a quartet of self-proclaimed ghost hunters take an assignment at a local school to rid its halls of the newly unleashed spirit of “Bloody Mary.” But despite their efforts to stage the perfect supernatural hoax, the group discovers instead that the ghost is very real and very much out for blood. Enlisting all of the ragtag help they can get, the four must find a way to turn their skills as charlatans into skills for survival in order to combat the ghost and save the day.
In the spirit of Peter Jackson’s earliest work, Ghost Killers Vs Bloody Mary is an exercise in hilariously bad taste, featuring gratuitous sex, violence, profanity and one seriously pissed-off ghost.  Dani Calabresa, Léo Lins, Danilo Gentili and Murilo Couto star in this outrageous and unforgettable film.
Trust us.

Readers know one simple fact about scary movies: We love them. And we are often scared . . . Big Time. And we try not to reveal too much of the plot, just how many bloody moments will get you, who the next victim will be.

Witness The Siren. A man searches a secluded lake for the monster that murdered his husband, while that monster falls in love with an unsuspecting visitor in the fantasy-horror film from writer-director Perry Blackshear. It arrives on DVD (courtesy of Dark Sky Films) on January 28.

The Siren is an enthralling, seductive and creepy supernatural tale about cursed star-crossed lovers. Tom (played wonderfully by Evan Dumouchel) is a mute man from a sheltered, religious background who is haunted by the childhood accident that cost him his voice. While on a retreat at a lake house, he meets Al (MacLeod Andrews), whose husband drowned in the lake-one of many mysterious deaths there.
The area is marked by a local legend of a lovelorn spirit who haunts the surrounding woods and drowns anyone she encounters. The legend proves all too real when Tom encounters the beautiful creature. Drawn to her immediately, Tom knows he has found his soulmate in the seemingly human Nina (Margaret Ying Drake), who must battle to repress her demonic instincts when she feels the same toward him. Meanwhile, Al, possessed by vengeance, circles the pair, getting ever closer to tracking down the monster that destroyed his happy marriage.
Part dark fairy tale and part elegant nightmare, The Siren is a heart-wrenching story of passion and revenge that will take hold of you and never let you go.

Except for 16-year-old Vivien, who’s trapped in The Vestalis Academy, a prison-like boarding school, keeping to herself and sticking her neck out for no one.

Until she is reunited with Sophia  . . . the former friend who betrayed her. Together the girls embark on a dangerous search to uncover the horrifying truth behind their imprisonment.

Soon running for their lives, the girls must save themselves or die trying.

That’s as much as we dare reveal. 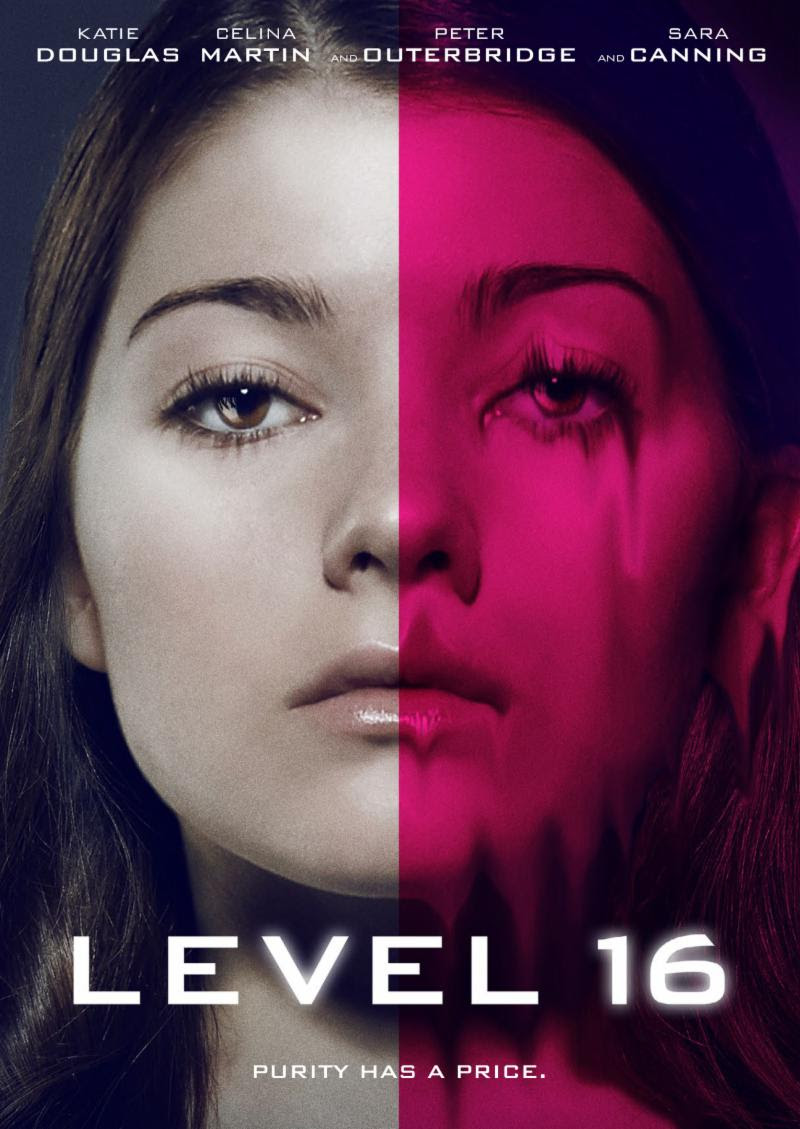 Wish Vivien a happy birthday. If you dare.

The Dark, the biggest hit of 2018 for Dark Sky Films, is now the horror DVD of the new year. On the outskirts of a small town lies Devil’s Den, a mysterious tract of woods where many have entered but no one has ever left. The local legend is that the spirit of a girl who was horrifically murdered there haunts (and hunts in) this dense forest, brutally slaying anyone who dares to step into her terrain.

When a young man with a dark past crosses her path, a series of events are set in motion that may lead to redemption for two tragically tortured souls. Part gothic fairytale and part chilling horror, director Justin P. Lange’s debut feature balances rich imagery with a brutal and bloody story of unlikely kindred spirits who must defend themselves against the villainous powers of the “normal” world.

Starring rising actors Nadia Alexander and Toby Nichols, The Dark has been called “an ingenious reworking of the zombie genre” by Film Inquiry. Horror Society praised it as “one of the best horror films of the year: 10 out of 10.”

Christmas may bring good cheer, but sometimes it brings a completely boorish relative to spoil the family gathering. My Aunt Thelma was one such creature.

Yet she wasn’t as bad as Uncle Nick, a drunken horndog who sets his sights on his brother’s stepdaughter . . . the endearing antihero of the raunchy comedy. Brian Posehn, a familiar and beloved comic character actor, gets the starring role of his career in this riotously anti-feel-good comedy arriving just in time for the Big Day.

Indeed. Lewd, drunken Uncle Nick stumbles his way through his brother’s cookie cutter family’s annual Christmas gathering in the hopes of scoring with a super-hot party guest . . . who just happens to be Nick’s brother’s stepdaughter!

The arrival of Uncle Nick’s equally crass sister coupled with Nick’s liquor-fueled faux pas cause family secrets to bubble to the surface . . . secrets that just might spell disaster for the whole clan before the night is over. Oh, and that super-hot guest(Melia Renee, Transparent)!

Maybe I will stay home, alone, with Uncle Nick (except on DVD) and Aunt Thelma.

And you thought Hannibal Lecter was scary. Think Henry . . . a common name, an uncommon film. It was a true game-changer, a film so upsetting in its blunt depiction of an amoral murderer that it made the slasher films of its time look like cartoons.  Henry: Portrait of a Serial Killer became a lightning rod in heated debates about cinema and censorship but has only grown in stature since its first showing in 1986. Now, on the 30th anniversary of its momentous debut, it returns in a 4K restoration on digital platforms and Blu-ray on December 6, following a nationwide theatrical release.

Henry: Portrait of a Serial Killer is a chilling profile of a cold-blooded killer that, 30 years after its historic festival premiere, has lost none of its power to shock. The film, loosely based on a true story, has been hailed as one of the most disturbing and terrifying examinations of mass murderers ever filmed.

Henry (Walking Dead icon Michael Rooker) is a psychopathic drifter who has coldly murdered a number of people for no particular reason and without any remorse. Leaving bodies in his wake, Henry makes his way to Chicago, where his he settles into the run-down apartment of his drug-dealing former prison friend and occasional roommate Otis (played by Tom Towles).

Also moving into the space is Otis’s younger sister Becky (Tracy Arnold), who is fleeing her abusive husband. As she fends off her brother’s incestuous advances, Becky finds herself attracted to Henry – unaware that he, along with Otis, are continuing their murderous rampage.

Director John McNaughton completed the film in 1986, and it was shown at that year’s Chicago International Film Festival. Yet it wasn’t until 1990 that a U.S. distributor was brave enough to give it a wide release. Henry predates the NC-17 rating and received its predecessor, the X rating, on three separate occasions.

As a result of it and related issues with Almodovar’s Tie Me Up, Tie Me Down, Phillip Kaufman’s Henry & June and Peter Greenaway’s The Cook, the Thief, His Wife and Her Lover, the MPAA created the NC-17 as its replacement on September 26,1990. Henry‘s current rating is “X (Surrendered)” though a renewed rating is pending.  The film’s violence, and the clinical, detached portrayal of Henry by the unforgettable Michael Rooker, originally earned it the MPAA’s highly restrictive NC-17 rating.

The response from both critics and the public was as visceral as the film itself, and it went on to gain praise as one of the most compelling and disturbing films of modern cinema. A whole new generation of film-goers will be introduced to Henry with an amazing new transfer that puts the film firmly back into the vanguard of contemporary cinematic horror.

In celebration of its 30th anniversary, the film returns with a thrilling, cinematic presentation that cements its reputation as one of the most harrowing and original American films of all time. Dark Sky Films, a division of MPI Media Group, proudly presents it in a brand-new 4K scan and restoration from the 16mm original camera negatives, and featuring a new 5.1 audio mix from the stereo 35mm mag reels, all approved by director John McNaughton.

They special features also make a killing and include: