Arrow Films and Arrow Academy sent a fiery arrow deep into our heaving bosom with these releases. Even Tums didn’t sooth the burning. And that’s a good thing. That’s how good these flicks are.
Two films are from legendary director Luigi Bazzoni. First up is The Possessed, co-directed by Bazzoni and Franco Rossellini.

The film follows a novelist that investigates the disappearance of an old lover and ends up unwrapping a mysterious web of murder, madness and perversion. This classic slice of Italian cinema, known for wonderfully combining film noir and giallo, features a new 2K restoration.

The second Bazzoni title is The Fifth Chord starring Franco Nero and Edmund Purdom. Following in the footsteps of Dario Argento, The Fifth Chord is a stunning giallo worthy of competing with the best the maestro has to offer.

This release features a new 2K restoration and a number of special features including a new interview with Nero.
On February 12th, Arrow offers up to classics from different eras, starting with 1972’s Horror Express. Starring horror icons Christopher Lee and Peter Cushing, this tale of terror takes horror fans on a first class trip that’s just as chilling today as it was forty plus years ago.

This new 2K restoration includes plenty of special features and has an intro from Horror Express super fan and horror journalist, Chris Alexander.
For something a bit more modern, Arrow is proud to release Takashi Miike’s Audition. This shocking J-horror entry exploded on the festival circuit nearly two decades ago and continues to be a favorite today.
Color Me Blood Red is from The Godfather of Gore,Herschell Gordon Lewis. This final chapter in the infamous “blood trilogy” features all the signature sleaze fans love Lewis for. Included in the multitude of bonus features is 1967’s Something Weird.

The final two releases are a pair of mid-40s classics from director Joseph H. Lewis and come courtesy of Arrow Academy with My Name is Julia Ross and So Dark the Night. The former is a Hitchcockian film noir about mistaken identity, while the latter is about a Paris detective that finds love and then suddenly disappears.

Close to completing your spring cleaning? Sit and savor these nifty Blu-rays from Arrow Films.

Not to bug you out: We have Takashi Miike’s Terra Formars, a sci-fi adventure sees a team of space explorers take battle against a horde of oversized anthropomorphic cockroaches.

The release in includes a full-full-length documentary on the making of the film, outtakes and more. Fans of Miike will certainly be thrilled to get their hands on this modern classic.
The Iguana with the Tongue Fire is an oddity for a giallo. Set in Dublin, this film from legendary director Riccardo Freda follows a series of brutal killings that carry political complications. The film is presented with a new 2K restoration from the original 35mm camera negative. A second giallo release: Mélo from director Alain Resnais.

This story of a doomed love triangle is based on the classic play from Henri Bernstein and come with a stunning new 2K restoration.
Keoma, one of the greatest spaghetti westerns, pairs two icons in star Franco Nero and director Enzo G. Castellari, this is the story of a half-breed gunfighter that returns home to find his fellow townsfolk terrorized by a terrible gang.

This truly epic film gets an epic release resented with a new 2K restoration and loaded with brand new special features. If you’re a spaghetti western aficionado this one is a must for your collection.
Mary Page Keller and Andrew Stevens star in Richard Friedman’s Scared Stiff. A singer moves into a colonial mansion with her son and boyfriend only to uncover deep, dark secrets hidden within the boarded up attic. 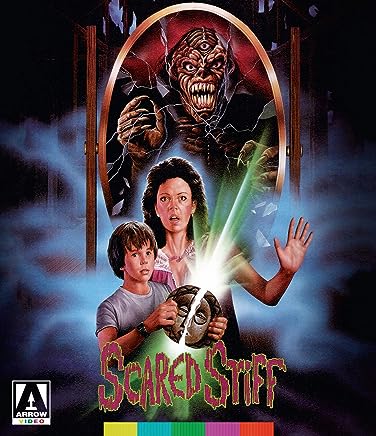 Fans of ’80s horror and practical effects are sure to have a soft spot for this one.
On April 30 comes the release of Khrustalyov, My Car! This darkly funny satire is the story of a military doctor arrested in Stalin’s Russia, accused of being a participant in the so-called “doctor’s plot.”