The laughs ended in August 2014 when Robin Williams killed himself at 63.  His death not only raised questions about how and why it had happened, but also prompted reassessments of his extraordinary life and career. F or anyone with the slightest acquaintance with popular culture over the past four decades, he seemed to be everywhere, from stand-up to TV, movies, and late-night talk shows, with an uncanny sense of the zeitgeist matched by few others.

Now, Dave Itzkoff presents a full and revealing portrait of one of the most beloved and original comedians and actors of our time in Robin (Henry Holt and Company, $30).  Illuminating both the man and the performer, Itzkoff draws on more than one hundred interviews with Robin’s family, friends, and colleagues, as well his own encounters and interviews with Williams over the years.  Included are insights from fellow comedians, actors, and collaborators such as Billy Crystal, David Letterman, Pam Dawber, Dana Carvey, Barry Levinson, Terry Gilliam, Eric Idle, Jeff Bridges and Bobcat Goldthwait. 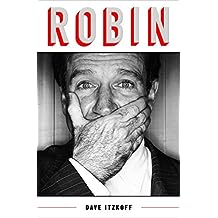 Among the topics covered and the news-making revelations offered are:

As Itzkoff notes, there is no actor or comedian today who can be considered Robin’s protégé or his heir, although he inspired many performers.  He had many admirers but no imitators—no one who tried to do what he did the way he did it.  When he died, his reputation for joyfulness and humor stood in stark contrast to the sad and solitary manner in which his life came to an end.  Inevitably, people asked, Who was he? What was behind all the accents and characters, the blurs of motion and flashes of energy?  How much did he truly reveal and how much did he keep hidden?

“Some part of him would be present in every set and stand-up role he played,” Itzkoff writes, “but in their totality these things did not add up to him.  The real Robin was a modest, almost inconspicuous man, who never fully believed he was worthy of the monumental fame, adulation, and accomplishments he would achieve.  He shared the authentic person at his core with considerable reluctance, but he also felt obliged to give a sliver of himself to anyone he encountered even fleetingly.  It wounded him deeply to think that he had denied a memorable Robin Williams experience to anyone who wanted it, yet the people who spent years by his side were left to feel that he had kept some fundamental part of himself concealed, even from them.” [p. 3]

With ROBIN, Dave Itzkoff gives us a comprehensive and revelatory portrait yet of a performer loved and admired by millions for his generosity of spirit, his quickness of mind, the laughter he sparked, and the hopefulness he inspired.  Nearly four years after the passing of Robin Williams, it will be eagerly read by anyone seeking to understand who he truly was.