They are, without a doubt, the greatest comedy team to have ever graced the big screen. The laughs! The slapstick shenanigans! The  homoerotic moments. (No, Ollie and Stan were not gay . . . but think back: They slept in one bed. Stan was married four times; Ollie three time.)
But it’s the laughs and slapstick and laughs and slapstick that we remember after all these years. (L&H made 106 films as a team, including guest appearances.
How did Stan and Ollie get together in the first place? They had appeared together by chance in an earlier film called The Lucky Dog, but it was not until each had joined Hal Roach that their teaming began.

Stanley and Ollie were appearing in the same films at Roach when director/supervisor Leo McCarey recognized the comic contrast between them and encouraged their teamwork. They first appeared in something resembling their eventual format in a 1927 release called Duck Soup. 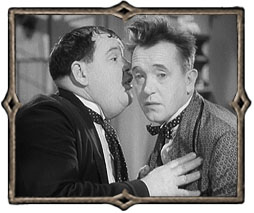 And oh, by the way, Hardy’s most famous catchphrase is often misquoted, “Well, here’s another nice mess you’ve gotten us into.” The incorrect “another fine mess” comes from the name of one of their short films, made in 1930.
So beloved that many of the available copies are blurred dupes printed from worn-out negatives. Now, the best of their short comedies and two of their finest features have been fully restored and collected in Laurel & Hardy: The Definitive Restorations (MVD Entertainment Group).  Save the date: The set goes on sale June 16.
This is, so far, the most exciting news about a DVD release this year.
These new prints, 2K and 4K transfers from the finest original 35mm materials in the world, look and sound as spectacular as when they were first released. Just how great are these prints?
“It’s no exaggeration to say that the films haven’t looked this good since they were first released in the ’30s'”, gushes Leonard Maltin.

Check out the clips below!

Other reasons you must own this set: There are world premieres of the L&H legendary “pie fight” from their 1927 silent film The Battle of the Century; here it makes makes its video debut after being “lost” for 90 years! Want more? There’s also That’s That!, the only reel of L&H bloopers and out-takes.
The set contains the classic shorts Berth Marks, Brats, Hog Wild, Come Clean, One Good Turn, Helpmates, Scram!, Their First Mistake, County Hospital, The Chimp, Towed in a Hole, Twice Two, Me and My Pal, The Midnight Patrol, Busy Bodies, The Music Box (which won the first Academy Award for Best Live Action Short Comedy in 1932); also included are their two best feature-length films, Sons of the Desert and Way Out West.
Not enough? There are eight hours of exclusive extras, including 2,500 rare photos and studio documents; audio and film interviews with L&H co-workers; original music tracks and trailers; and a full restoration of their one surviving color film, The Tree in a Test Tube.
Well, here’s another nice mess they’ve gotten us into!