Charles S. Cohen, Chairman and CEO of Cohen Media Group is ready to pull another gem out of his wealth of wonders.  On May 21, Cohen releases Merchant Ivory Productions’ Academy Award-nominated The Bostonians in a 4K restoration on Blu-ray, DVD and digital platforms.
The Bostonians (1984) was the second of three handsomely mounted Henry James adaptations by the team of producer Ismail Merchant, director James Ivory and screenwriter Ruth Prawer Jhabvala, following 1979’s The Europeans and preceding The Golden Bowl (2000).
Academy Award-winning actresses Jessica Tandy, Vanessa Redgrave and Linda Hunt headline an all-star cast alongside Christopher Reeve in this adaptation of James’s 1886 novel of political intrigue and forbidden romance in post-Civil War Boston. Olive Chancellor (played by Redgrave) finds her infatuation with young activist Verena Tarrant (Madeleine Potter) challenged by a Southern lawyer (Christopher Reeve) who also loves her. An intricately drawn study of the impact of women’s suffrage on society, The Bostonians is also a lush evocation of the late 19th century, with dazzling cinematography by Walter Lassally and a memorable score by frequent Merchant Ivory collaborator Richard Robbins.
The film received two Academy Award nominations, for Best Actress (Vanessa Redgrave) and Costume Design (Jenny Beavan, John Bright). Redgrave was named Best Actress by the National Society of Film Critics.
Special features on the Blu-ray and DVD include a new interview with director James Ivory, “Conversations from the Quad: James Ivory on The Bostonians,” the original trailer and the 2018 re-release trailer.
One of the first Merchant Ivory productions, the sumptuous Shakespeare Wallah established the tone for so many of the collaborations to come from producer Ismail Merchant and director James Ivory: the deft, multilayered screenplay by their frequent collaborator Ruth Prawer Jhabvala, luminous cinematography, a wry sense of humor and a cast of characters rich in their very human complexity. 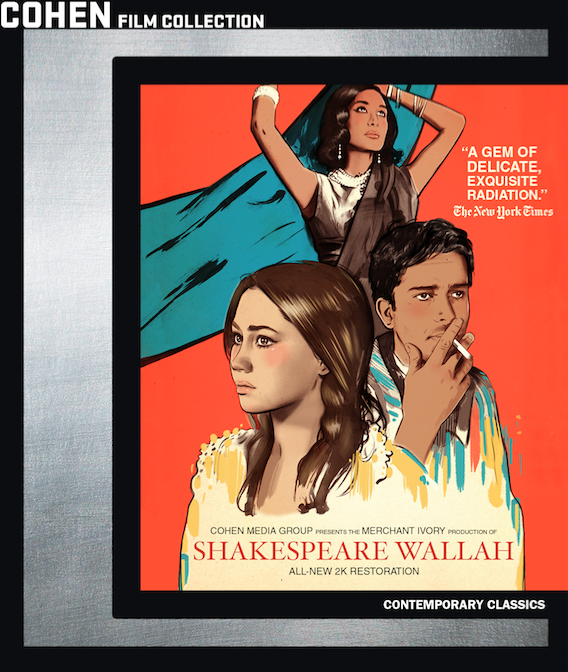 Cohen Film Collection’s new restoration of the film, released in theaters nationwide in 2017, came from the 35mm composite fine grain master held at the archive of the George Eastman Museum. The scan and 2K digital restoration was completed in conjunction with the British Film Institute’s Unlocking Film Heritage program. This breakthrough film is now on Blu-ray, DVD and digital platforms.
The true story of British actor-manager Geoffrey Kendal and his family of traveling theatrical players is used as a fascinating lens into the ever-evolving relationship between Great Britain and India. The film follows Tony Buckingham (Geoffrey Kendal) and his wife, Carla (Laura Liddell), as the actor-managers of a troupe who travel through ’60s post-colonial India staging Shakespeare’s plays. But the Buckinghams come to realize to their dismay that classic English theater is falling out of favor in a changing country where the public has become more excited by the explosion of vibrant Bollywood films – and, more deeply, is looking to move beyond everything British. Meanwhile, the Buckinghams’ daughter Lizzie (future Britcom favorite Felicity Kendal) becomes involved in a love triangle that would fit perfectly in both a Shakespeare drama and a Bollywood musical.
With music by the great Indian filmmaker Satyajit Ray and memorable performances by cinema icons Shashi Kapoor and Madhur Jaffrey (who won the Silver Bear award for Best Actress at the 1965 Berlin International Film Festival), Shakespeare Wallah remains a one-of-kind gem of modern world cinema.
Both the Blu-ray and the DVD editions are supplemented with a wealth of bonus material, including a conversation with the filmmakers, featuring Ismail Merchant, James Ivory, Shashi Kapoor and Felicity Kendal; the film’s original trailer; and its 2017 rerelease trailer.
Cohen Film Collection starts the New Year off with another gem: Merchant Ivory Productions’ modern classic Heat and Dust, now on Blu-ray, DVD and digital platforms. The 1983 multi-generational drama—about the clash between modern-day India and its past Raj era of British rule, and starring Julie Christie and Greta Scacchi—has received a striking new 4K digital restoration.
Merchant Ivory’s magnificent film moves effortlessly between the vibrant world of modern India and the magnificent splendors of the Raj. Cross-cutting between two generations, the acclaimed film by the longtime team of director James Ivory, producer Ismail Merchant and screenwriter Ruth Prawer Jhabvala is a sprawling epic of self-discovery and a lush evocation of the prismatic and sensuous beauty of India.
As she searches for answers to the mystery surrounding a long-ago affair between her aunt Olivia (portrayed by Greta Scacchi) and an Indian prince (Shashi Kapoor), Anne (Julie Christie) becomes immersed in the local culture, the pull of the past simultaneously leading her into a clearer view of her own future. Jhabvala adapted her own novel to great effect, and Richard Robbins created the haunting score. The film earned the Merchant Ivory team nine BAFTA nominations and a Palme d’Or nomination at Cannes for director Ivory.
Cohen Film Collection has given Heat and Dust lavish treatment on disc. The two-disc DVD includes a feature-length audio commentary track; the film’s original trailer as well as its 2017 re-release trailer; and the the rarely shown 1975 Merchant Ivory film Autobiography of a Princess, starring James Mason.
The two-disc Blu-ray includes all of the above plus an interview with producer Ismail Merchant, director James Ivory, writer Ruth Prawer Jhabvala, composer Richard Robbins, and cast members Greta Scacchi and Nickolas Grace; the featurette Remember Heat and Dust; a new conversation between Ivory and filmmaker Chris Terrio; and a new on-stage Q&A with co-star Madhur Jaffrey.