She is one of our favorite women. She’s a fave with Michael Bloomberg, Hilary Clinton and Katie Couric, this gem named Shannon Watts—and dubbed “the NRA’s Worst Nightmare”. 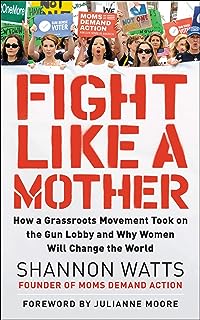 On the morning of December 14, 2012, stay-at-home-mom Shannon Watts was folding laundry when the news broke that there had been a shooting in Newtown, Connecticut involving young children. Outraged and heartbroken, Shannon felt an overwhelming need to act. Discovering there was no organization for gun violence correspondent to MADD—Mothers Against Drunk Driving—she vowed to build it.

Fight Like a Mother is the powerful story of how one mother’s cry for action started a national women’s movement—MADD
Mom’s Demand Action—to fight some of the richest and most powerful people in America: the gun lobby. It is an inspiring
record of how outraged mothers became engaged citizens, creating a powerful grassroots network of local chapters in all
50 states.

Along with her observations and wisdom, Watts shares inspiring messages of perseverance, courage, and compassion, and outlines the core mantras and principles that MDA has used to battle the NRA and the intimidating tactics they use to prevent gun safety progress. Throughout, Shannon proves that a woman with a laptop can be more powerful than a man with a gun.

Fight Like a Mother explores the unique power of women. While not everyone can be on the front lines of the fight, every mom is already an organizer, and Shannon shows them how to put their skills to use in their own community, in their own way. Bringing activism into the everyday, the book will inspire everyone—mothers and fathers, students and teachers, lawmakers, and every citizen outraged, angry, and motivated to work for change—transforming hearts, minds and laws, and most importantly, show them how to honor their values with action.