This year marks 200 years since the birth of Frederick Douglass, the escaped slave who became one of the greatest orators and writers of his generation, a leading abolitionist and political activist of the nineteenth century, and one of the most significant figures in American history.

On October 16, Simon & Schuster will publish the first major biography of Douglass in a quarter century: Frederick Douglass: Prophet of Freedom ($37.50) by award-winning historian David Blight. 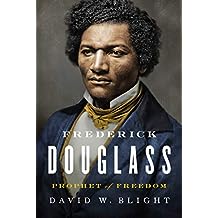 Blight had access to a private collection of papers and letters that have never been used in any full Douglass biography, and his new work offers profound insight into Douglass’s life and legacy. Blight spent ten years writing the book, but has been researching Douglass for over 35 years, beginning with his PhD dissertation completed in 1985. Since then, Blight—who is Professor of American History and Director of the Gilder Lehrman Center for the Study of Slavery, Resistance, and Abolition at Yale University—has become the nation’s leading authority on Frederick Douglass.

To read this biography is to experience the depth of a great man’s life through the eyes of the author who has worked the longest to understand him best. With Frederick Douglass: Prophet of Freedom, Blight breaks new ground in Douglass scholarship, in particular shedding light on the last thirty years of Douglass’s life and his family relationships, his controversial second marriage, his back-breaking and nearly endless lecture tours into old age, and his role as the leader of black America in Washington D.C.

And you think our country is in trouble.
What if D-Day had failed and the Third Reich continued to roll across Europe?  Following in the alternate history footsteps of The Man in the High Castle and Fatherland, Resistance shines a light on the little-known British Resistance Organization (BRO), Winston
Churchill’s top-secret and highly trained civilian army designed to wreak havoc on occupying enemy forces.

This BAFTA Award-winning revisionist drama will be available on DVD and Digital on March 7 from Omnibus Entertainment, the specialty label of award-winning independent and foreign film distributor Film Movement.
Starring Michael Sheen, Andrea Riseborough, Iwan Rheon and Tom Wlaschiha, Resistance, based on the acclaimed novel by Owen Sheers is set in Nazi-occupied Britain.  D-Day has failed, and, as Panzer divisions and Nazi troops sweep westward across the dispirited countryside, Sarah Lewis (Riseborough), a young Welsh farmer’s wife, awakens to find that her husband, along with all the other men are gone, presumably having fled the village to join the top-secret BRO.

Shortly thereafter, a small Wehrmacht platoon arrives in the pastoral countryside and sets up an outpost in the valley to root out the resistance.  And when the severe winter forces them to cooperate with the locals, Sarah befriends the commanding officer, Albrecht (Wlaschiha), and the lines between collaboration, duty, occupation and survival are put to the test. Called “a beautiful, elliptical war film with the haunting qualities of a ghost story” by Empire Magazine, Resistance was nominated for the prestigious Cinevision Award at the Berlin Film Festival and a BAFTA Cymru Winner for Best Actress (Sharon Morgan).