A new year that will bring change. We will kick out the scumbag misleading the country.

And we  will celebrate the 100th anniversary of the ratification of the 19th Amendment to the Constitution, which granted women the right to vote.

Leading the parade is Ellen Carol DuBois’s Suffrage: Women’s Long Battle for the Vote (Simon & Schuster, $28), a wonderful book that explores the full scope of the dramatic and inspiring suffrage movement—which brought half of the American population into the voting body, gave them fundamental political rights, and recognized their existence as individuals beyond the scope of family roles. 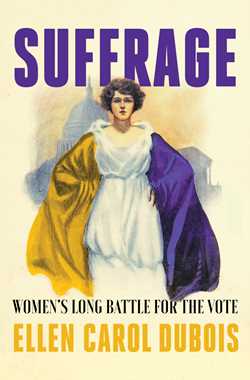 Renowned historian  DuBois, a distinguished Professor Emeritus at UCLA, takes us through the very heart of American history with vivid portraits of the suffrage movement’s bold leaders and devoted activists. Profiled in the book are well-known foremothers like Elizabeth Cady Stanton and Susan B. Anthony, as well as lesser known figures like Carrie Chapman Catt and Alice Paul.

Suffrage: Women’s Long Battle for the Vote is sure to become the authoritative account of one of the great episodes in the history of American democracy.