Film Movement has the knack to move things around . . . actions that move film fans to explore genres, watch movies previously unknown to them, introduce themselves to new directors, new actors, new talent.
We took such actions this year and discovered a trove of treasures; films that moved us to tears and laughter and the promise to keep our minds and hearts open.
A small sampling of Film Movement flicks that must be added to your must-see list:

Oh! The genius of Fritz Lang . . . M, Metropolis,  Fury, Scarlet Street,  Rancho Notorious, Clash By Night, The Blue Gardenia, The Big Heat.  After more than two decades of exile in Hollywood, the master filmmaker Lang triumphantly returned to his native Germany to direct a lavish two-part serialized cliffhanger from a story he co-authored almost 40 years earlier: 1959’s The Tiger of Eschnapur and The Indian Tomb, which together would become known as Fritz Lang’s Indian Epic.

Operating outside the Hollywood system and given more freedom and resources than he had seen in years, Lang returned to remake the exotic adventure The Indian Tomb, which he originally helped to pen in 1921 but didn’t have the opportunity to direct himself. With breathtaking location shoots, a large international cast, elaborate sets and a jungle’s worth of danger and treachery, Lang crafted a blend of evocative images and montage that, in the twilight of his career, once again proved him a virtuoso of film form.
Initially released in America as Journey to the Lost City, a radically condensed 90-minute version, these exotic masterpieces are finally presented in all their original splendor, featuring more than three hours of breathtaking cinematography and cliff-hanging suspense, in this new 4K restored edition. The release of the film is cinematic history.

It’s been described as “less a swan song than a meteor shower rendered in Technicolor”, a fab phrase that we wish we came up with. Cassandro the Exotico! is a stirring feature portrait of a lucha libre legend in his waning years in the ring. The latest documentary portrait from director Marie Losier, whose 2011 film The Ballad of Genesis and Lady Jay followed the gender reassignment journey of musician and artist Genesis P-Orridge, puts the spotlight on another, very different gender-bending LGBTQ+ performer.

Famed as much for his flamboyant drag and sky-high pompadour as for his show-stopping kicks and flips, 47-year-old Saul Armendariz — known in the wrestling ring as Cassandro — is a champion “exotico” wrestler, a luchador who performs in drag with generous doses of camp vamping between back-breaking suplexes. His trailblazing ascent as one the industry’s first openly gay wrestlers has resonated internationally for a quarter century- the story of an underdog and a queer icon simultaneously fragile and mighty. Losier captures the moving, at times humorous, and always colorful dualities of this legendary figure with her talent for forging intimacy with a subject while celebrating his individuality broadly.
The film, shot entirely on 16mm film, follows the “Liberace of the Lucha Libre” in his final years of competition, struggling with opponents and the cruel passage of time, while melding tender encounters and larger-than-life fight scenes into a stylish whole that reflects the vivid textures and hues of a dazzling life in sport.
Dazzling, daring and diversely different, Cassandro the Exotico! is the Best Film Movement Film of the Year!

We never had heard of Arvo Pärt, but That Pärt Feeling The Universe of Arvo Pärt introduced us to the most performed living composer in the world. Who knew? 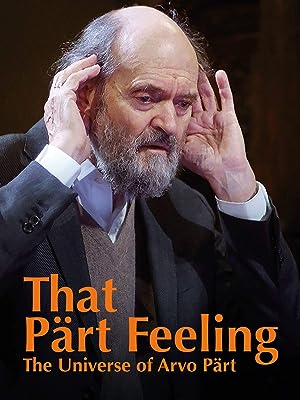 He is considered to be something of a recluse, and his person and work have rarely been documented on film. In this documentary we get to know Pärt as an artist combining an incredible sensitivity with humor and energy in his work.

The Little Prince, Antoine de Saint-Exupéry’s celebrated philosophical children’s book about friendship, love and respect, is one of the world’s most widely translated literary works. In The Miracle of the Little Prince, director Marjoleine Boonstra visits the people who have translated this little masterpiece from French into Tibetan, Tamazight (North Africa), Sámi (northern Finland and Scandinavia) and Nawat (El Salvador). All of these languages are under threat. Passionately enthusiastic language researchers, teachers and translators talk about how the observations of an alien prince on earth are interpreted in their own culture. 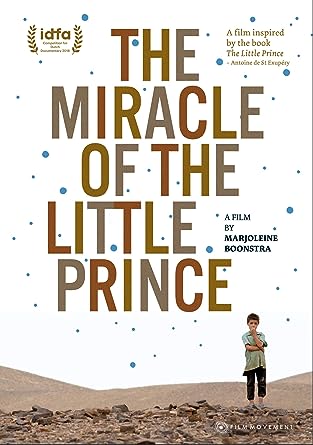 They also recall the first time they read the book, and, naturally enough, discuss the linguistic challenges they faced how do you translate water faucet if there’s no such term in your world? This original approach and the exquisite, calm cinematography allow for the telling of personal stories that are as bizarre, human and painful as the experiences of the titular prince. It s a film that inspires wonder a testimony to the imagination and the solace and liberation it offers.

Bursting with the colorful street style and music of Nairobi’s vibrant youth culture, Rafiki is a tender love story between two young women in a country that still criminalizes homosexuality. Kena and Ziki have long been told that “good Kenyan girls become good Kenyan wives”. But they yearn for something more. Despite the political rivalry between their families, the girls encourage each other to pursue their dreams in a conservative society. When love blossoms between them, Kena and Ziki must choose between happiness and safety. 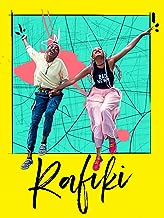 The Mad Adventures of “Rabbi” Jacob, a riot of frantic disguises and mistaken identities, has been magnificently restored in 4K and has been released on Blu-ray fpr the time in North America.
Victor Pivert, a blustering, bigoted French factory owner, finds himself taken hostage by Slimane, an Arab rebel leader. The two dress up as rabbis as they try to elude not only assassins from Slimane’s country, but also the police, who think Pivert is a murderer.

Pivert ends up posing as Rabbi Jacob, a beloved figure who’s returned to France for his first visit after 30 years in the United States. Adding to the confusion are Pivert’s dentist-wife, who thinks her husband is leaving her for another woman, their daughter, who’s about to get married, and a Parisian neighborhood filled with people eager to celebrate the return of Rabbi Jacob. A hoot!

Umar Bin Hassan hasn’t even hit 70 yet, but he walks with difficulty and there’s sadness and fatigue in his eyes. As a member of The Last Poets, a group of performance poets who expressed the progressive spirit of the times starting in the late ’60s, he was a major influence on later hip-hop artists. In one of his best-known pieces, “Ni****s Are Scared of Revolution”, he criticizes his black brothers’ destructive, macho behavior. Scared of Revolution, based on Christine Otten’s book, The Last Poets, concentrates on Hassan’s personal life, in which he still fights his demons. He grew up poor with a violent, unpredictable father, which in turn left him with an inferiority complex. In the course of his adult life, he has had a string of bad relationships and left children without a father figure. In his darkest hour, he also battled a crack addiction.
“Deep inside, Umar was scared of the revolution himself,” says fellow member of The Last Poets Abiodun Oyewole. But, as this intimate documentary portrait shows, Hassan takes control of his life again, breaks the destructive cycle and does his best to be the devoted father and grandfather that he was never fortunate enough to have.

We save the best for last. With an emphasis on “best”.
Since its launch in 2015, the Film Movement Classics label has been dedicated to seeking out distinctive films of the past from around the globe, and offering these digitally restored classics to cineastes everywhere. We go excited—truly, really excited—when we found out that Film Movement has acquired a baker’s dozen of British classics from the ’40s-’60s for Blu-ray and digital release on the Film Movement Classics label beginning this month.
That gasp you just heard? That was me. Yes, that excited.
Each of these new home entertainment releases has been digitally restored for optimal enjoyment, and each release will feature numerous bonus features for an unparalleled viewing experience.
The first two British classics to be released on December 20 are The Titfield Thunderbolt and Passport to Pimlico, both hailing from Ealing Studios, whose output from the ’40s and ’50s helped define the Golden Age for British Cinema and the birthplace of the most delectable crop of films to decorate postwar cinema. 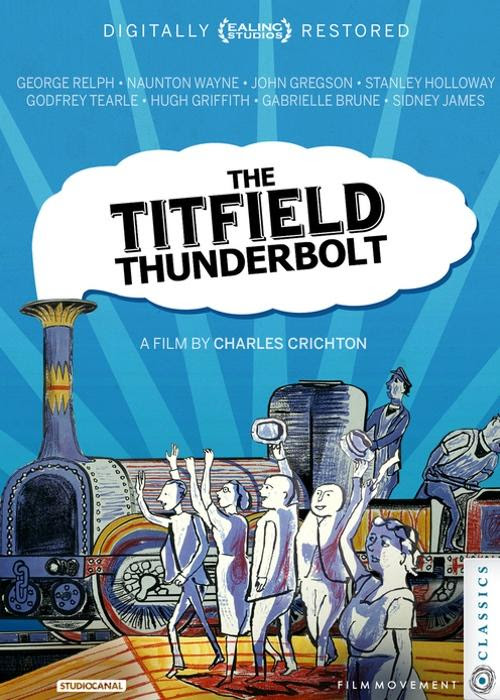 The Titfield Thunderbolt (1953), the first Ealing comedy to be made in color, tells the story of the inhabitants of Titfield, who endeavor to prove that their single-track railway is the only form of transport for the village. The villains of the piece are two unsavory characters who have introduced a smart brand new single-decker bus to Titfield. Crump and Pearce, owners of the bus company, are determined to cease the running of the Titfield train, by fair means or foul. The film starred Ealing regulars including Stanley Holloway, Naunton Wayne, George Relp, John Gregson and Hugh Griffith. Extras on the Blu-ray include, “Making The Titfield Thunderbolt“, “The Lion Locomotive” and a Locations featurette; Home Movie Footage from Cinematographer Douglas Slocombe; Slocombe on Charles Crichton audio interview, the original trailer and an archival stills gallery.
Starring Stanley Holloway, Hermione Baddeley, Margaret Rutherford and Paul Dupuis, Passport to Pimlico (1949) is one of the most whimsically charming Ealing films from director Henry Cornelius. When an accidental explosion of an undetonated WWII German bomb unearths a buried cellar containing both fabulous riches and an unknown royal charter from King Edward IV that cedes the surrounding land to the last Duke of Burgundy, the town of Pimlico is turned upside down. 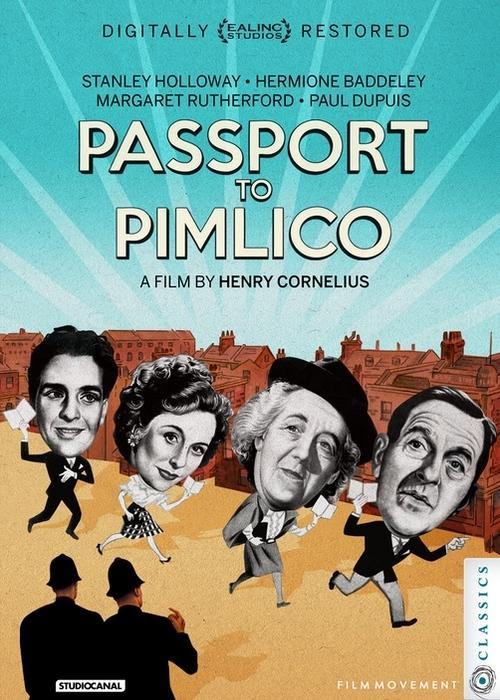 Since the charter has never been rescinded, the London district of Pimlico is now legally the long-lost Duchy of Burgundy, and therefore no longer subject to British law, including postwar rationing and pub closure hours. The locals, quick to see the opportunities, do their best to take full advantage of the situation.  Extras include a Locations featurette with Film Historian Richard Dacre; an interview with BFI Curator Mark Duguid; a restoration comparison and an archival slideshow.
Yes, dear readers, as Film Movement Classics reveals other releases, we will be the first to let you know. For instance . .  .
The next release, arriving on February 18, 2020, is The Alastair Sim Blu-Ray Collection. Though he is perhaps best known for his role as Scrooge in the 1951 film adaptation of A Christmas Carol, Scottish character actor Alastair Sim is one of the best-loved and most prolific actors in classic British comedy. Often appearing in multiple roles, he starred in more than 50 films beginning in 1935 and was both critically acclaimed and unfailingly popular, regularly topping the cinema-goers popularity polls. This specially-curated set includes Hue and Cry (1947), Laughter in Paradise (1951), The Belles of St. Trinian’s (1954) and School for Scoundrels (1960).
We tell us this  so that any cash Santa brought you must be set aside so you can buy this invaluable collection.