John Kerry tells the story of his remarkable American life—from son of a diplomat to decorated Vietnam veteran, five-term United States senator, 2004 Democratic presidential nominee, and Secretary of State for four years—a revealing memoir by a witness to some of the most important events of our recent history. Every Day is Extra ($35) is John Kerry’s candid personal story. A Yale graduate, Kerry enlisted in the U.S. Navy in 1966, and served in Vietnam. He returned home highly decorated but disillusioned, and testified powerfully before Congress as a young veteran opposed to the war. Kerry served as a prosecutor in Massachusetts, then as lieutenant governor, and was elected to the Senate in 1984, eventually serving five terms. In 2004 he was the Democratic presidential nominee and came within one state—Ohio—of winning. Kerry returned to the Senate, chaired the important Foreign Relations Committee, and succeeded Hillary Clinton as Secretary of State in 2013. In that position he tried to find peace in the Middle East; dealt with the Syrian civil war while combatting ISIS; and negotiated the Iran nuclear deal and the Paris climate agreement. 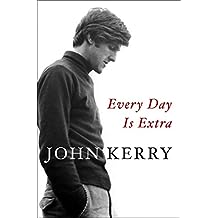 Every Day is Extra  shows Kerry for the dedicated, witty, and authentic man that he is, and provides forceful testimony for the importance of diplomacy and American leadership to address the increasingly complex challenges of a more globalized world.

Combining her signature storytelling with essential lessons from four of our nation’s presidents—Abraham Lincoln, Theodore Roosevelt, Franklin D. Roosevelt and Lyndon B. Johnson—Goodwin shows how they recognized leadership qualities within themselves and were recognized as leaders by other. She explores their unique journeys to as they navigated and grew through adversity, and she analyzes how they emerged to confront the challenges and contours of their times. Are leaders born or made? Where does ambition come from? How does adversity affect the growth of leadership? Does the leader make the times or do the times make the leader? This seminal work provides an accessible and indispensable road map for aspiring and established leaders in every field. In today’s polarized world, these stories of authentic leadership in times of apprehension and fracture take on a singular urgency.

Uproarious, highly anticipated, and yes, totally fake, The Mueller Report: The Leaked Investigation into President Donald Trump and His Inner Circle of Con Men, Circus Clowns, and Children  ($16) shares with the American public the findings of  Mueller’s investigation into the election of asshole known as Alfred Frump, leaked to the Very Biased and Highly Unemployed comedy writer Jason O. Gilbert by an anonymous source known only as “Melania T.”

This is a hoot,  a hilarious inventory of the dirt, grime and Big Mac crumbs that the special counsel has collected on President Trump during his months of investigation. Filled with interview transcripts, intercepted phone calls, incriminating emails, text exchanges, ALL-CAPS TRUMP TWEETS WITH SPELING ERRORS, and more, it whisks readers from the leaky White House to an even leakier Ritz-Carlton hotel room in Moscow, from Donald Trump Jr.’s covert meeting with Russians in Trump Tower to Michael Cohen’s secret sale of a Trump Tower apartment to a shell corporation called Oligarch LLC. And, for the first time, you’ll find out what really happened in that Moscow Ritz-Carlton hotel room between Donald Trump and two well-hydrated Russian escorts. NOT GOOD!