Fifteen years after The Devil Wears Prada was published, Lauren Weisberger revisits one of her favorite characters from the novel—Emily Charlton, first assistant to Miranda Priestly, now a highly successful image consultant who has just landed the client of a lifetime. She’s working in Hollywood as an image consultant to the stars, but recently, Emily’s lost a few clients. She’s hopeless with social media. The new guard is nipping at her heels. She needs a big opportunity, and she needs it now. 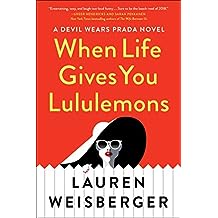 Karolina Hartwell is as A-list as they come. She’s the former face of L’Oreal. A mega-supermodel recognized the world over. And now, the gorgeous wife of the newly elected senator from New York, Graham, who also has his eye on the presidency. It’s all very Kennedy-esque, right down to the public philandering and Karolina’s arrest for a DUI—with a Suburban full of other people’s children. We can’t reveal more because we just pissed in pour pants. It’s that funny!

Now we know why Ronan Farrow won a Pulitzer. In War on Peace: The End of Diplomacy and the Decline of American Influence (W. W. Norton & Company, $27.95), he reveals how America is becoming a nation that shoots first and asks questions later. Or never. And while this is a new extreme, Farrow shows us it is not unprecedented. Herr Adolph Frump is putting his foot onto the throat of a diplomatic enterprise that has been weakening for decades—and history tells us that the consequences could be catastrophic. The book brings the State Department into vivid focus, as Farrow personalizes epic events and offers an account of American statecraft at once conversational and trenchant. 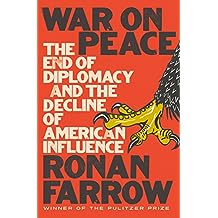 He provides readers with a page-turning, character-driven narrative, using the personal stories of
those whose lives were affected—and sometimes destroyed—by the decline of American diplomacy to shed light on this unsung transformation in America’s place in the world. War on Peace  contains interviews with every former secretary of state alive; Farrow also unearths previously secret documents and speaks with hundreds of insiders—from whistleblowers to ambassadors to generals, spies, and warlords—to reveal how the power to make foreign policy slipped from America’s civilian diplomats and into the hands of its uniformed officers, the consequences around the world, and what might be done to change
course.

Nikola Tesla invented the radio, the induction motor, the neon lamp, and the remote control. His scientific discoveries made possible X-ray technology, wireless communications, and radar, and he predicted the Internet and even the smart watch. His image appears on stamps;Life magazine lists him as one of the one hundred most famous people of the last millennium.

And yet, his contemporaries and fellow inventors Thomas Edison and Guglielmo Marconi achieved far greater commercial success and popular recognition. In Tesla: Inventor of the Modern [W. W. Norton & Company, $26.95 hardcover], Richard Munson asks whether Tesla’s eccentricities eclipsed his genius. Ultimately, he delivers an enthralling biography that illuminates every facet of Tesla’s life while justifying his stature as the most original inventor of the late nineteenth century.

In Giant: Elizabeth Taylor, Rock Hudson, James Dean, Edna Ferber, and the Making of a Legendary American Film  (St. Martin’s Press; $27.99)  Don Grahamoffers a larger-than-life narrative of the making of the classic film based on Edna Ferber’s controversial novel. Taking a wide-angle view of America—and Texas—in the Eisenhower era, Graham reveals how the film and its production mark the rise of America as a superpower, the ascent of Hollywood celebrity, and the flowering of Texas culture as mythology. Featuring James Dean, Rock Hudson, and Elizabeth Taylor, Giant dramatizes a family saga against the background of the oil industry and its impact upon ranching culture—think Spindletop Hill in Beaumont, Texas, and the fabled King Ranch in South Texas. Almost as good as the film.

In Inseparable: The Original Siamese Twins and Their Rendezvous with American History (Liveright, $28.95) Yunte Huang recounts the peculiar, and often ironic, rise of Chang and Eng from sideshow curiosity to Southern gentry—an unlikely story that exposes the foibles of a young republic eager to tyrannize and delight in the abnormal. Famous for their quick wit (they once refunded a one-eyed man half his ticket because he “couldn’t see as much as the others”), Chang and Eng became a nationwide sensation, heralded as living symbols of the humbugged freak.  Their unrivaled success quickened the birth of mass entertainment in America, leading to the minstrel show and the rise of showmen like P.T. Barnum.

And it is here that we encounter a twist. Miraculously, despite the 1790 Naturalization Act which limited citizenship to “free white persons” (until 1952), Chang and Eng became American citizens under the Superior Court of North Carolina. They then went on to marry two white sisters—Sarah and Adelaide Yates—and father 23 children despite the interracial marriage ban (in place until 1967). They owned 18 slaves and became staunch advocates for the Confederacy, so much so that their sons fought for the South during the Civil War. Huang reveals that it was perhaps their very “otherness” that worked for them: they were neither one individual, or quite two.

Forty-five years after Bruce Lee’s sudden death at 32, Matthew Polly has written the definitive account of Lee’s life. Following a decade of research, dozens of rarely seen photographs, and more than one hundred interviews with Lee’s family and friends, Bruce Lee: A Life (Simon & Schuster, $35) breaks down the myths surrounding Bruce Lee and delivers a complex, humane portrait of the icon.

The book  explores Lee’s early years: his career as a child star in Hong Kong cinema; his actor father’s struggles with opium addiction; his troublemaking teen years; and his beginnings as a martial arts instructor. Polly chronicles the trajectory of Lee’s acting career in Hollywood, from his frustration seeing role after role he auditioned for go to a white actors in eye makeup, to his eventual triumph as a leading man, to his challenges juggling a sky-rocketing career with his duties as a father and husband. Polly also sheds light on Bruce Lee’s shocking end—which is to this day is still shrouded in mystery—by offering an alternative theory behind his tragic demise.

When Henry Alford first wrote about his experience with a Zumba class, little did he realize that it was the start of something much bigger. Dance would grow and take on many roles for Henry: exercise, confidence builder, an excuse to travel, a source of ongoing wonder and—when he dances with Alzheimer’s patients—even a kind of community service.  Tackling a wide range of forms with gusto (including ballet, hip-hop, jazz, ballroom, tap, contact improvisation, swing), And Then We Danced: A Voyage into the Groove (Simon & Schuster, $26) takes us through the works and careers of luminaries ranging from Bob Fosse to George Balanchine, Twyla Tharp to Arthur Murray, Isadora Duncan to Savion Glover. Equal parts memoir and cultural history, this laugh-out-loud book will inform, entertain and leave readers tapping their toes.