We are bit embarrassed to admit that we only recently learned about Undercrank Productions (undercrankproductions.com). We learned that this marvelous company, the brainstorm of the marvelous historian and Undercrank founder Ben Model, releases must-see, must-have DVDs that we assumed have been long lost. 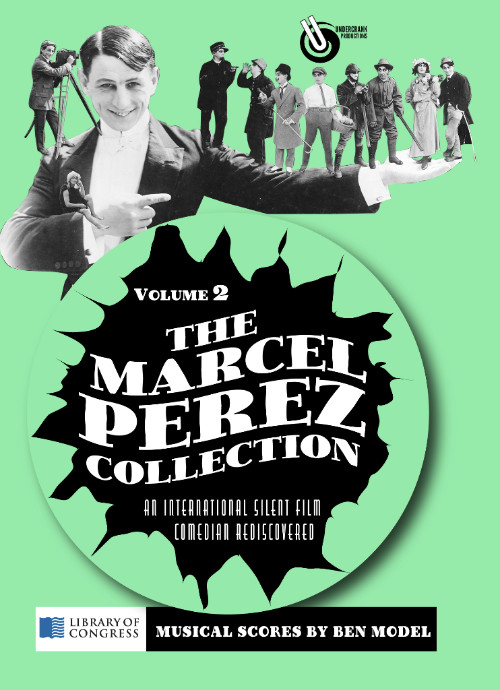 Following a 15-year career in movies in Europe,  Perez came to the U.S. in 1915 where he made another 60 comedy shorts as the character Tweedledum or “Tweedy” or “Twede-Dan” for a number of independent studios in Florida, New York and New Jersey. Perez is the only silent screen comedian besides Max Linder to have had this kind of long-reaching career on both continents. Perez’s charming and acrobatic screen persona, as well as his inventive directorial flair, make his short comedies stand out from those made by most of the better-known “second-tier” slapstick comics.  Sadly, only a fraction of Perez’ output, which spanned 1900-1928, survives. In the three years since the release of the first DVD, however, eight more films have either surfaced or become available for this home video release.

“What continues to impress me in seeing more of Marcel Perez and his films,” says Model, “is how inventive the humor, storytelling and filmmaking is considering they’re from 1916-1922. He’s doing stunt work and surreal gags before Keaton or Larry Semon did, and one of the shorts–A Scrambled Honeymoon (1916)–opens with a gag sequence that is nearly directly copied in a Chaplin short made the following year. It’s been a thrill working with the Library of Congress and MoMA on the disc, as well as being supported by fan crowdfunding, to be able to restore Perez’ reputation and renown. Hopefully it won’t take another three years for more of his films to turn up, and I’ll bet there’s more of them out there.”

The films on the The Marcel Perez Collection: Volume 2 were preserved by or were sourced from the Library of Congress and the Museum of Modern Art. The rare archival 35mm copies are presented in new 2K digital scans, with new musical scores by noted silent film accompanist Ben Model.