I have been practicing TM, Transcendental Meditation to some, for many years.  Stress melts. Tightness dissolves. The mind opens, relaxed and rested.

I have been telling people about TM for decades. Let’s face it: Everyone we know is stressed. No matter where we come from, or what we do, stress is an epidemic that threatens our mental, physical, emotional, and spiritual health. While there is no cure, there is a simple practice that dramatically changes how we respond to life’s challenges: the Transcendental Meditation technique. This 5,000 year‑old technique has a clear impact on our 21st century problems. 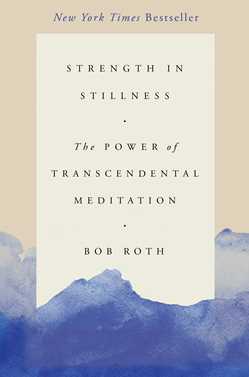 I have been telling people about TM for decades. But instead an introduction to Bob Roth. The co‑founder and vice president of the David Lynch Foundation has studied and taught Transcendental Meditation for more than 40 years. Once a skeptic, he is now one of the most experienced and sought‑after experts in the world. He has brought TM to millions of people, working not only with celebrities and business leaders, but also with inner‑city schools, veterans’ hospitals, women’s shelters, HIV/AIDS clinics, and prisons.  Medical experts agree that the epidemic of stress is damaging our physical and emotional health at younger and younger ages. While there is no one single cure, the Transcendental Meditation technique is a simple practice that dramatically changes how we respond to stress and life’s challenges.

In Strength in Illness: The Power of Transcendental Meditation ($24), Roth breaks down the science behind meditation in a new, accessible way. He highlights the three distinct types of meditation—focused attention, open monitoring, and self-transcending—and showcases the evidence that Transcendental Meditation is the most effective way to reduce stress, access inner power, and build resilience. The book is so free of gimmicks, mystical verbiage and over‑inflated research studies.