A Downton Abbey fan? That’s number 567,340,027. This holiday season will be the ultimate celebration for those millions. PBS Distribution has released two all-new complete box sets of the series, as well as a stocking full of officially licensed Downton Abbey merchandise. Visit shoppbs.org for deals that will dazzle fans.

First we tease you with a clip. How many times have you seen this episode?

Downton Abbey: The Complete Limited Edition Collector’s Set is the ultimate gift. All six seasons–52 episodes–of the Emmy, Golden Globe and SAG-winning program are offered. The set contains 13 hours of bonus content including 5 all new hours as well as exclusive collectible keepsakes that lovers of the series will cherish forever. This is the ultimate Downton Abbey box set and a must-have for every fan. 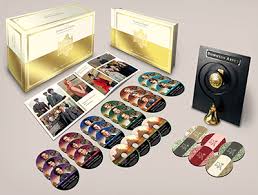 The beautiful gold keepsake box contains a working Downton Abbey pull-bell, ready to hang on the wall or stand on a shelf. There’s a collectible set of six elegant cork-based coasters featuring the official Downton Abbey crest. There’s The Costumes of Downton Abbey, an exclusive photo-filled booklet featuring a forward from executive producer Gareth Neame. Then there’s a collectible hardcover book with 22 discs featuring the 52 episodes, including each season finale Christmas special, video extras from each season, full color photography and favorite quotes from iconic characters.

Downton Abbey: The Complete Collection
Led by Hugh Bonneville, Elizabeth McGovern, Michelle Dockery and Maggie Smith, the acclaimed ensemble cast brings to life all the drama and intrigue of the inhabitants of Downton Abbey, the lavish English country manor, home to the Earl of Grantham. 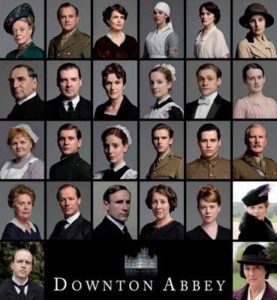 This complete collection set, available just in time for the holidays, includes all 52 episodes of the series of this Golden Globe, SAG and Emmy-winning series, following the Crawley family and their servants through all of the splendor and romance, desire and heartbreak, scandal and rumor that Downton Abbey viewers across the globe have grown to love.

this beautifully detailed ornament made of high-quality resin that will allow you to enjoy Downton Abbey’s classic style for years to come. It stands 3.5 inches tall.

Downton Abbey Trio Pull Bell Ornament
Whether you spent your days upstairs or down, the ringing of bells was a constant sound. This replica of the trio pull bells used by the family and staff of Downton Abbey will help you ring in the holidays year after year. 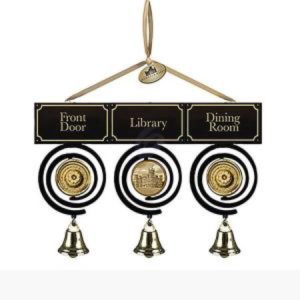 Downton Abbey Rotating Musical Glitter Dome
This elegant glass glitter dome features a detailed look at the castle and with the flick of the wrist you can see the magic at Downton. This collectible is perfect for every fan in the family.

on and off switch. It’s the perfect gift for tea enthusiasts and Downton Abbey fans alike.