In the last decade of a career that spanned half a century, Johnny Cash capped off his musical legend with a breathtaking final act, recording a series of raw, stripped-down albums with producer Rick Rubin. Those albums reestablished Cash as a vital artist, while adding a remarkable closing chapter to his incredible body of work.

In November 2003, two months after Cash’s passing, Rubin’s label American Recordings released Unearthed, an expansive box set of material, most of it previously unreleased, recorded during the artist’s graceful twilight years. The set was originally planned to celebrate Cash and Rubin’s decade of recording together, and the final mixes had been sent to Cash, but he passed away before receiving them. The recordings, which run the stylistic gamut from stark balladry to punchy rockabilly to heartfelt gospel to classic covers, offer a stunning encapsulation of Cash’s wide-ranging musical vision, and provide a fitting epitaph for his iconic career.

To celebrate the Man in Black’s enduring and influential legacy, American Recordings and UMe have reconfigured this monolithic collection for its first-ever vinyl release, spreading Unearthed’s 79 songs over nine high-quality 180-gram vinyl LPs while expanding the original box’s distinctive packaging for the long-playing format.

Available November 3, the Unearthed vinyl box features a pair of cloth-bound books housed in an LP-sized black cloth slipcase. One book holds the nine LPs, while the other is a gorgeous 60-page coffee table book that incorporates Sylvie Simmons’ extensive liner notes, drawn from five days of interviews at Cash’s home in Tennessee, as well as Cash and Rubin’s comments on every song on the set, plus a copious selection of photographs from the recording sessions, including some of the last photos ever taken of Cash. Preorder Unearthed now: https://UMe.lnk.to/JohnnyCashUnearthed

Indeed, in the years since Cash’s passing, the artist’s legend has grown and his music has gained in power.  It’s hard to think of a more appropriate and impressive sendoff for this one-of-a-kind American original than the massive musical statement that is Unearthed.

Petula Clark sang about the reasons going downtown. After all, a visit “can forget all your troubles, forget all your cares.” That was then. Fast forward a decade or so, and the music and energy about to explode in the ’70s punk underground electrifies the coming-of-age drama London Town (IFC Films). Featuring a stunning performance by Jonathan Rhys Meyers as Joe Strummer of the legendary band the Clash, the film comes to DVD from IFC Films on February 14.
Think of this as a musical valentine.

When 15-year-old Shay (portrayed by Daniel Huttlestone) hears the music of the Clash for the first time, it’s a revelation, opening up a new world of social consciousness and anti-establishment defiance beyond anything he’s known in his dead-end London suburb. After his father is injured in a work accident, Shay takes over driving his cab and one fateful night, picks up none other than Joe Strummer (Jonathan Rhys Meyers), the lead singer of the Clash. Drawn into the heart of the city’s burgeoning punk scene, Shay forges two relationships that will change his life, falling in love with rebellious cool girl Vivian (Nell Williams) and finding and unexpected connection with the Clash’s electrifying frontman.

Through being forced to take care of his family, his friendship with Strummer and his relationship with Vivian, Shay passes some important milestones on his way to adulthood.Propelled by a blistering soundtrack that bounces from the Clash to the Ramones to Buzzcocks, London Town captures the sound and spirit of a scene that shook the world. And lives on still. 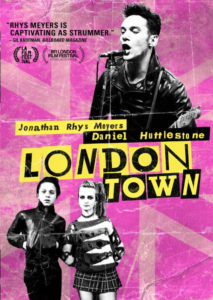 The IFC Films theatrical release co-stars Natascha McElhone and Dougray Scott. It features the classic music not just of the Clash but of such other major artists as the Ramones, Buzzcocks, the Stranglers, Toots and the Maytals, Willi Williams and Stiff Little Fingers. It was an official selection of the BFI London Film Festival and the Los Angeles Film Festival.

Morphine can be addictive. It’s a drug of choice. When it comes to “low rock,” the Boston-born band Morphine blazed like a comet across the international music scene in the ’90s, rising from local small clubs to indie and major label record deals, high and wide critical acclaim, and packed shows until their untimely demise.

The trio’s unique and mesmeric sound continues to resonate with its fans and music lovers as the group ascends to legendary if not iconic status. The documentary Morphine: Journey of Dreams  (MVD Entertainment Group) is the definitive, in-depth tale of this unique musical act’s compelling career and life together and their resonant musical creativity. 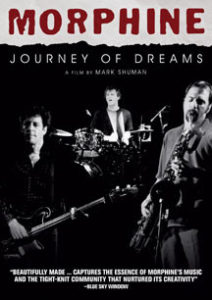 Journey of Dreams  doesn’t just get behind the music, but inside the band as its story is primarily told by the trio’s surviving members, saxophonist Dana Colley and drummers Billy Conway and Jerome Dupree, plus the close-knit familial coterie that worked with them as well as Sandman’s girlfriend Sabine Hrechdakian.

It’s punctuated by incisive commentary and observations from such friends and admirers of the group as Henry Rollins, Joe Strummer and Steve Berlin of Los Lobos. A wealth of live performance footage gathered from across Morphine’s career recalls and amplifies the band’s innovative yet at the same time classic, timeless and “beautifully bottom-heavy” sound, as Rolling Stone (the mag, not the Mick) praised it.

Viewers ride and fly along with the hard- touring band’s road experiences, vibrantly brought to life as Colley reads from his tour diaries at key points in the film as well as through his accompanying Polaroid pictures and Super 8 films.

Journey of Dreams is not just a tale of music business struggle, triumph and tragedy, but also a love story (among its members and team as well as Sandman and Hrechdakian) as well as an adventure, drama, travelogue, and something of a roller coaster ride. When all is told, an evocative and loving tribute to a rock band that was like no other.