In the aftermath of Brexit, the body of a young woman is found by the river Thames. The tabloids are instantly aflame, pointing fingers at her neighbor Mr. Wolphram, a former teacher at an elite boarding
school and the perfect target for media monstering: intellectual, introverted, and eccentric. Charged with investigating this murder is a detective who was once one of Wolphram’s students.

As the case unfolds, he must face memories from decades ago that he has tried hard to forget—the routine physical and psychologal abuse acted out by teachers at the school (never Wolphram), and of his friend and schoolmate Danny, who disappeared at the peak of IRA terror. In the midst of the present murder investigation, the detective confronts his own suppressed memory, which proves the ultimate source of both mystery and revelation. 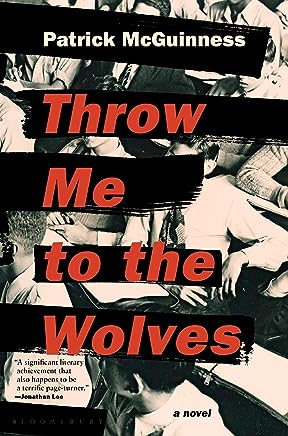 With the momentum of classic crime fiction and the emotional depth of literary fiction, Throw Me to The Wolves (Bloomsbury, $29) vividly explores the harrowing force of the modern media spectacle to distract from more common and pervasive acts of violence, and the dangerous power of the ever-present news feed to dissolve the boundary between truth and fiction.

From the Man Booker Prize-longlisted author Patrick McGuinness, Throw Me to The Wolves is an enthralling story of voyeurism, betrayal, and the gray areas between truth and fiction in an era of tabloid media and fake news.