Praise from Morbid Curiosity: The Disturbing Demises of the Famous and Infamous . . . from celebs who are not dead. Yet. 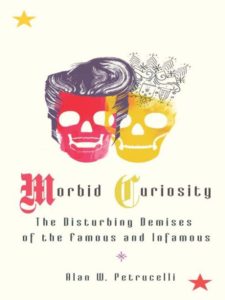 “Alan has written a very funny, very clever book—it’s shocking and sinful, and I couldn’t put it down. He leaves no gravestone unturned, nothing buried. Morbid Curiosity is partSix Feet Under, part Mad magazine. It’ll make a killing!” — Joan Rivers

“Even celebrities die, and they do so in far more grand-scale ways than mere mortals. Now that they’ve met their maker, they’ve also found their chronicler, Alan W. Petrucelli. He unearths the demises of the rich and infamous—from Valentino to Heath Ledger and beyond—with detailed research, dishy wit and insight. This book is to die for!” — Michael Musto

“Morbid Curiosity is a cornucopia of Hollywood gossip and tidbits, much more humorous than macabre, delivered from a different point of view than any book I’ve read about celebs. It’s breezy, pithy, informative, odd and, despite its subject matter, certain to amuse.”— Robert Osborne, host of Turner Classic Movies

“I couldn’t put the book down until I finished every word. Morbid Curiosity is a terrific read for those who have to know every little detail about the famous and infamous. Some great stories to be told at the dinner table. Can’t wait to give my next dinner party!”  — Rona Barrett