Anyone whose website is “unshavenmouse” is worthy of a second, even third, look.

Even with his debut novel.

The mouse is Neil Sharpson; his debut novel is the dystopian thriller When the Sparrow Falls(Tor Books, $26.99). He crams his ideas about the diffusion of emotional consciousness in a post-apocalyptic world that breeds authoritarian control. This is a tale that foresees human compliance to technology, an effort to salvage the remains of existence in the digital age. 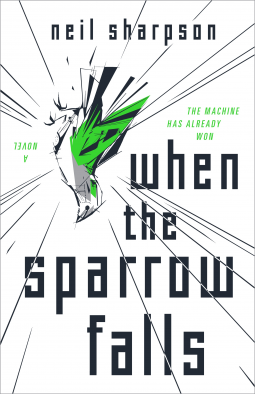 When the Sparrow Falls is a darkly-funny and frightening meditation about the truth of our condition when all that we’ve ever known about ourselves is on the cusp of erasure; when being human is no longer about the soul, but rather the vitalization of our flesh.

There was always something off about propagandist Paulo Xirau. In a nation like the Caspian Republic – the last bastion of humanity in a world given over to artificial intelligence – it is expected to preserve one’s body. To betray the State means to stray from all that makes one human. The penalty? A brutally inhumane death.

When the leaders of the Caspian Republic discover their most loyal supporter Paulo Xirau, unexpectedly dead, is in fact a “machine,” State Security Agent Nikolai South is given a new assignment: to chaperone the widow, Lily, the only “machine” visitor ever invited from the outside world, to determine what happened to her husband. Perhaps what’s stranger than Xirau’s death is Lily’s eerie resemblance to Nikolai’s late wife. As he safeguards the State’s most unwanted guest, he stumbles into a plot larger than them all. And it may just bring down the republic for good.