Did you know that a mountain lion, known as P-22, lives in the middle of Los Angeles? Did you know that on the Facebook campus in Silicon Valley, Mark Zuckerberg and his staff have provided a home for an endearing family of wild gray foxes? Or that wolves have returned to California after a 90-year absence, led by the remarkable journey of the wolf OR-7? The important book When Mountain Lions Are Neighbors: People and Wildlife Working It Out in California (Heyday, $18) shares dozens of stories highlighting the work of individuals, groups, organizations and communities throughout California that help foster place-based connections for wildlife to thrive alongside people, even in highly urbanized areas. The author receives no royalties from this book, and proceeds will benefit the National Wildlife Federation’s conservation work in California. 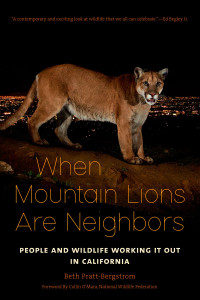 The book, created in partnership with Heyday and the National Wildlife Federation, written by National Wildlife Federation’s California Director, Beth Pratt-Bergstrom, is an entertaining read of true tales about people and wildlife championing a new paradigm for conservation: coexistence.
“The truth is that we can each play an important role in ensuring a bright future for wildlife, no matter where we live, and these California stories serve as examples of how we can each take action, from anywhere across our country and around the world,” says Collin O’Mara, President, CEO, National Wildlife Federation.
Many do not realize that California, with its many successful wildlife stories, provides a great example in understanding ways that people can conserve and better co-exist with wildlife that can function as a model worldwide. This “new nature” is personal, urban, social, and diverse, and California has given birth to it.

“When the number-one threat to wildlife worldwide is loss of habitat, we can no longer think of our cities or towns or neighborhoods, or even our backyards, as exempt from the natural world—or as off-limits to wildlife,’ says Beth Pratt-Bergstrom. “We need to expand our view and realize that our shared spaces are as essential to conservation as our traditional protected lands. We need to create a new model of suburban and urban wildlife refugia.”

Pratt-Bergstrom has worked in environmental leadership roles for more than 25 years, and in two of the country’s largest national parks: Yosemite and Yellowstone. As the California Director for the National Wildlife Federation, she says, “I have the best job in the world—advocating for the state’s remarkable wildlife.” Indeed! Connect with Beth at BethPratt.com.
Books will be sold in bookstores, libraries, museums, parks and other retail locations. It will also be sold on IndieBound.com, Amazon.com, and BarnesandNoble.com, as well as on the National Wildlife Federation’s site (NWF.org) and Heyday’s (HeydayBooks.com).

Most people called it a war. Most still do, except for the more than three million people (including 58,000 Americans) who were killed in the Vietnam War; more than half were Vietnamese civilians. The war was actually a costly armed conflict that pitted the communist regime of North Vietnam and its southern allies, known as the Viet Cong, against South Vietnam and its principal ally, the United States. It began in 1954 (though conflict in the region stretched back to the mid-1940s), after the rise to power of Ho Chi Minh and his communist Viet Minh party in North Vietnam, and continued against the backdrop of an intense Cold War between two global superpowers: the United States and the Soviet Union.  The video is graphic!

People who still yearn to learn about the event will find out how it developed, learn about the main battles and meet the key figures involved in 50 Things You Should Know About the Vietnam War (QEB Publishing, $15.95). This new title from the 50 Things You Should Know About series is packed full of infographics, illustrations, maps and color photographs from the Vietnam War. 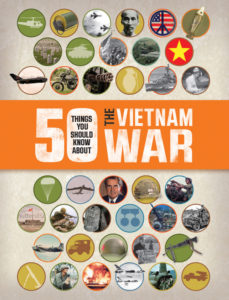 Not only identifying major political and military figures from both sides of the conflict with the ‘”Who’s Who” pages, this title also documents the significance of medical workers, protesters, and civilians who were also a part of this tumultuous time. Photos of memorabilia, such as patches, pins and bracelets, add a personal aspect to the war. Yes, it’s much less graphic that the footage seen here.

Joan Rivers worshipped him. Many people hated him. Fighting for freedom of speech was nothing new to foul-mouthed Lenny Bruce, whose raw language often got him in trouble. Or fired. Or arrested. During a 1964 obscenity charge for using foul language in a Greenwich Village nightclub act, Bruce fired his lawyers and botched the appeal. The conviction on the misdemeanor obscenity charge made it almost impossible for him to get work; he declared bankruptcy and was found dead on August 3, sitting on the toilet with his pants around his waist, a needle in his arm, and his lifeless body surrounded by drug paraphernalia. He was 40 years old.

But in 2003, nearly four decades after the comic died, he got the last laugh when on December 23, he was posthumously pardoned by New York Governor. George E. Pataki, 39 years after being convicted of obscenity.. The governor said the posthumous pardon—the first in the state’s history—was “‘a declaration of New York’s commitment to upholding the First Amendment.”

No comment from the dead Bruce, but his daughter Kitty Bruce gushed, “Isn’t this wonderful? Isn’t this a great day in America? Boy, has this been nuts or what? This is what America is all about.”

Want more Lenny Land? Da Capo Press is reissuing How to Talk Dirty and Influence People ($16.99), Bruce’s classic autobiography to mark the 50th anniversary of the comedian and counterculture icon’s death, with a new preface by Lewis Black and a new foreword by Howard Reich. 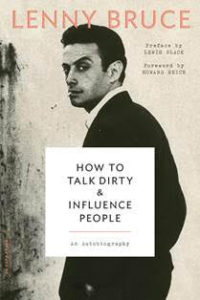 The book remains a brilliant account of his life and the forces that made him at once one of the most important and controversial entertainers. “His scathing attacks on organized religion, politics, the death penalty, race and the ways in which we have chosen to live, made me laugh and made me think,” writes Lewis Black in a new preface. “This book gives us a solid context of what Lenny lived through and had to face. (We complain about the politically correct environment that makes comedy difficult? Are you kidding me?) We are talking about not even being able to tell your jokes without the threat of imprisonment.”

In 1964, after being arrested on multiple occasions, Lenny Bruce was prosecuted because of his words and convicted of obscenity. In this book, “Bruce in effect is still arguing his case, unflinchingly pointing out what his accusers have done to him, even while they held great legal power over him. The bravery of that act should inspire us all,” Howard Reich writes in a new foreword. “If there’s a central lesson running through all of this, perhaps it’s Bruce’s apparently boundless respect for everyone else’s rights, even as his own were being so grievously violated.”

Assembling his musings in essayistic chapters, Bruce writes candidly of the drama of his childhood; his Navy service and the postwar boredom that led him to seek a discharge; his emergence as a comic and how he virtually invented stand-up comedy as we know it today; and the substance abuse that tragically claimed his life. “Equally important, though, is the heady range of ideas Bruce dares to take on in this volume,” adds Reich. “The man was hell-bent on proclaiming the absurdities he saw but others didn’t or wouldn’t.”

There’s a great deal to be said about Thelma Adams’ book “The Last Woman Standing (Lake Union Publishing, $14.95) . . . and all of it good. Very, very good. A feminist western mixing real and fictional characters, and totally defiling the era and prevailing attitudes of the times is no easy trick to pull off, and Adams does it with humor and, lord help us all, charm.

Adams has been writing features and criticism of the entertainment industry for quite a while. Her first novel, “Playdate”, a gossipy tale of a steamy community, won high critical acclaim. But here, in “The Last Woman Standing”, we have something special. Twenty years after the Civil War, a young daughter of faintly repressive Jewish immigrants escapes from San Francisco to Tombstone, Arizona to join wheeler dealer boyfriend Johnny Behan.

However, it is the legendary Wyatt Earp who steals her heart, aggravating Behan, and, well, we get a lady’s eye view of the famed gunfight at the O.K. Corral in the bargain. Part of the enjoyment of the work is the combined epic and the immediacy and tenderness of the tale is extraordinary.

The era is plagued by the memories of the Civil War, the steal steam animosity between the Lincoln Republican and Democrats, and the discovery of silver (and millions) in Tombstone. It may seem like an enormous leap, but Josephine Marcus, our heroine here, is at least the cousin if not the sister of Jane Austen’s Elizabeth Bennett. Spunkier (what an awful word!) and forced to deal with a bit more violence than the Austen heroine, her bravery, humor, and humanity shine forth in a novel well worth reading. Adams’ creation will stay with the reader for a good, long time.