Consider this a rhapsody in blue.
A most delicious and compelling composition.
We are referring to the George Gershwin  gem, but we are also praising James Kaplan’s novel, Rhapsody (Gallery Books, $30).
One evening in 1924, Katharine “Kay” Swift—the restless but loyal society wife of wealthy banker James Warburg and a serious pianist who longs for recognition—attends a concert. The piece: Rhapsody in Blue. The composer: a brilliant, elusive young musical genius named George Gershwin. 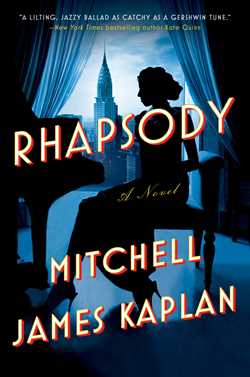 Kay is transfixed, helpless to resist the magnetic pull of George’s talent, charm, and swagger. Their ten-year love affair, complicated by her conflicted loyalty to her husband and the twists and turns of her own musical career, ends only with George’s death from a brain tumor at the age of 38.
An fun aside: As the couple entered a nightclub one evening, Oscar Levant reportedly announced, “Ah, look! Here comes George Gershwin with the future Miss Kay Swift.”
Set in Jazz Age New York City, this stunning work of fiction wrapped in truth, explores the timeless bond between two brilliant, strong-willed artists. George Gershwin left behind not just a body of work unmatched in popular musical history, but a woman who loved him with all her heart, knowing all the while that he belonged not to her, but to the world.

At the height of his popularity, Oscar Levant was the highest-paid concert artist in America. He outdrew Horowitz and Rubinstein, with whom he shared the distinction–rare among classical pianists–of a star on the Hollywood Walk of Fame. He performed under conductors including Arturo Toscanini, Sir Thomas Beecham, Dimitri Mitropoulos, Fritz Reiner and Eugene Ormandy, and was the definitive interpreter of his friend George Gershwin.

Levant’s 1945 recording of Rhapsody in Blue with Ormandy and the Philadelphia Orchestra topped the Billboard classical chart and remained one of Columbia Records’ best-selling albums for a decade. That classic interpretation and all his other recordings for the label, spanning the years 1941 to 1958, have now been collected in a new Sony Classical eight-disc box set.

The vast majority of them are appearing for the first time ever on CD, in a 10″ x 10″ fully illustrated 124-page hardcover book. The book contains previously unseen photographs and images of facsimile documents and covers. The edition sees the first ever release of Levant’s own composition Blue Plate Special, which only exists in his 1947 recording and would otherwise have been lost forever. It reflects his compositional style and musical eccentricity at its best. The other world premiere is Levant’s recording of Bach’s Partita No. 1, the only example of him playing Bach. According to his daughter Lorna, the Partita was a piece Levant loved and played often at home.

Levant’s Columbia recordings, on which his fame as a pianist has always been based, began with Gershwin, as they do in this new Sony complete collection. From 1942 there are the Concerto in F with André Kostelanetz conducting the New York Philharmonic along with the Three Preludes. That applies as well to the 1945 Rhapsody in Blue with Ormandy, which is also here, of course, together with the famous 1949 recordings of theSecond Rhapsody and “I Got Rhythm” Variations with Morton Gould and his Orchestra.

Among the other CD premieres are Levant’s 1949 recording of Honegger’s charming Concertino with Reiner conducting the Columbia Symphony Orchestra as well as many solo performances from the 1940s and 50s of pieces by Beethoven (including the “Moonlight” Sonata), Chopin, Liszt, Brahms, Debussy, Ravel, Rachmaninoff and Copland (selections from the ballet Billy the Kid, arranged for piano by Lukas Foss). There is also a track of Levant playing his own music, a jazzy, almost manic little piece called Blue Plate Special, recorded in 1947.

Another rarity is taken from Warners’ 1946 movie Humoresque, one of the few films centered around classical music. Franz Waxman received an Oscar nomination for his original score and arrangements. The young violinist hero is portrayed by John Garfield, his wealthy older lover by Joan Crawford, his confidant and pianist by Oscar Levant, and his violin playing by Isaac Stern. The movie climaxes with one of the glories of 40s cinematic kitsch. As she listens to the strains of Wagner’s Liebestod being played by the Garfield character on the radio, the distraught Crawford character drowns herself in the Pacific. On the soundtrack, it is Stern and Levant who are revelling in Waxman’s irresistibly schmaltzy Wagner arrangement for violin, piano and orchestra. No Oscar Levant set would be complete without it.

“In some situations I was difficult, in odd moments impossible, in rare moments loathsome, but at my best unapproachably great.” Music lovers now have an unprecedented opportunity to judge Oscar Levant’s self-adulating, self-abasing appraisal for themselves.