Throughout his three-decade career as a founding member of and bassist for The Rolling Stones, Bill Wyman was known to the world as the band’s “quiet one”. Now, in The Quiet One (IFC Films), the famously private music legend speaks out about his extraordinary life and experiences as part of “the greatest rock and roll band in the world.”
Opening up his vast personal archive—a lifetime’s worth of previously unseen home movies, photographs and memorabilia— Wyman reflects on his early years with The Stones, the band’s meteoric rise to fame, and his search for a sense of “normalcy” amid the whirlwind of sex, drugs, and rebellion. Endearingly humble and down to earth, Wyman pulls back the curtain to offer a one-of-a-kind perspective on life as a reluctant rock star who let his pulsating bass do all the talking on “Brown Sugar,” “Gimme Shelter,” “Paint It Black” and countless other Stones classics.
The Quiet One also includes interviews with Eric Clapton, Bob Geldof, and Stones record producer Andrew Oldham and engineer Glyn Johns. The San Francisco Chronicle‘s Joel Selvin said, “After umpteen previous documentaries, concert films and video biographies, that this film consists almost entirely of previously unseen footage of the band qualifies as something of a minor miracle.”
In the early ’70s, one man stood up to the New York City police force. Hailed as a hero by many, hated by others, officer Frank Serpico made headlines when he blew the whistle on a culture of bribery and corruption within the department.

His one-man crusade for police reform inspired the 1973 Al Pacino film that bears his name, but the real-life saga is as gripping as anything Hollywood could dream up.
Now, in Frank Serpico (IFC Films), Frank tells his story in his own words: From his Italian-American roots in Brooklyn to his disillusionment with the NYPD to his riveting account of a dramatic drug bust (and possible set-up) 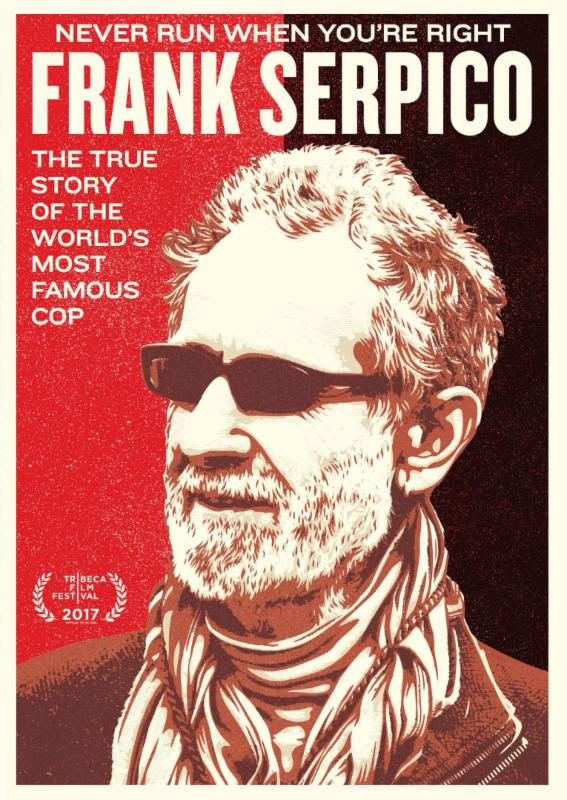 that ended with him being shot in the face.
Featuring music by Jack White and interviews with Serpico’s associates and admirers, including writer Luc Sante and actor-filmmaker John Turturro, this is an inspiring, all-access portrait of a courageous man who refused to betray his ideals.
Save the date: Frank Serpico is released March 13.

Laird Hamilton is perhaps the greatest big wave surfer of all time, a living legend who has tamed some of the world’s mightiest waves. Among the surf community, he is also one of the most controversial figures, an innovator who has revolutionized the sport often to the dismay of purists. The thrilling, up-close portrait Take Every Wave: The Life of Laird Hamilton (IFC Films) traces his remarkable journey, from his rebellious childhood in Hawaii to his fearless first forays into surfing to his relentless pursuit of ever-bigger waves, a quest that ultimately led him to conquer what’s been called “the heaviest wave ever ridden.” 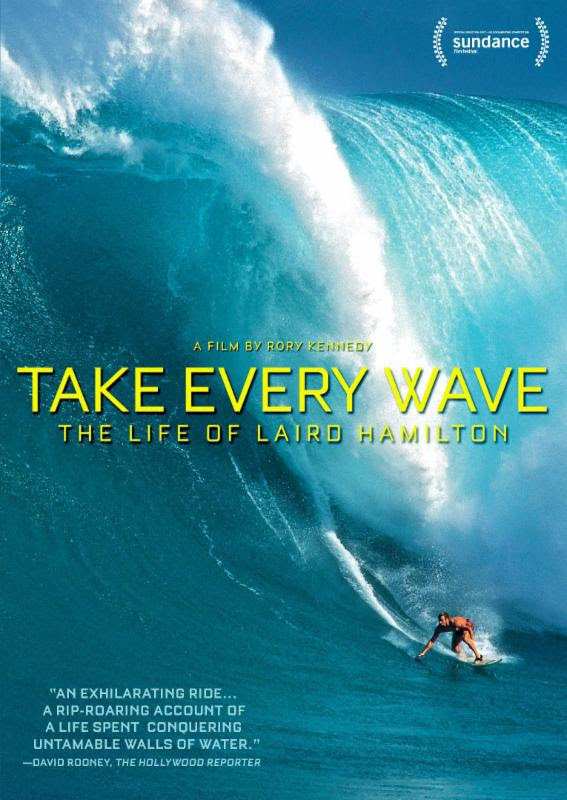 One of the most renowned card magicians of all time, Richard Turner astounds audiences around the world with his legendary sleight of hand. What they may not even realize, and what makes his achievements all the more amazing, is that he is completely blind. Charting Turner’s colorful life from his tumultuous childhood to the present, Dealt (IFC Films) reveals how through determination and force of will, he overcame seemingly insurmountable obstacles to rise to the top of his profession.

The  film is both a tantalizing, up-close look at the secretive world of magic and a candid, awe-inspiring portrait of a man who lives beyond his limitations. The IFC Films theatrical release has been widely honored, including winning the audience award for best documentary at SXSW, the Dallas International Film Festival and the Independent Film Festival of Boston.

In the mood for a madcap comedy, “an ingeniously intricate goofball comedy that evokes heroes of legend while bringing sociological abstractions to mucky life”, as New Yorker scribe Richard Brody calls it? Look no further than The Treasure (IFC), coming to DVD on September 19. 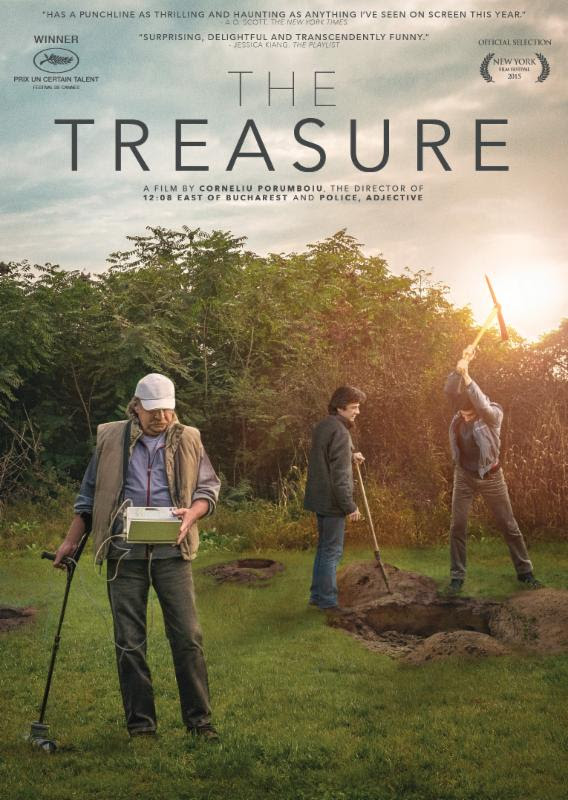 The Cannes prize-winning charmer from acclaimed director Corneliu Porumboiu spotlights a hunt for buried treasure that sends two men on a surprising comic caper. Costi (portrayed by Cuzin Toma) is a workaday family man whose cash-strapped next-door neighbor (Adrian Purcarescu) makes him an intriguing proposition: Help him find the fortune reportedly buried somewhere on the grounds of his family’s country home and split the profits. But as the two men dig, they unearth more than they bargained for, excavating not only dirt, but traces of Romania’s often tumultuous history. Part modern-day fable, part profound social commentary, The Treasure confirms Porumboiu’s status as second scribe (Scott Foundas of Variety) gushes that the director is “one of our great contemporary observers of the human comedy”
Petula Clark sang about the reasons going downtown. After all, a visit “can forget all your troubles, forget all your cares.” That was then. Fast forward a decade or so, and the music and energy about to explode in the ’70s punk underground electrifies the coming-of-age drama London Town (IFC Films). Featuring a stunning performance by Jonathan Rhys Meyers as Joe Strummer of the legendary band the Clash, the film comes to DVD from IFC Films on February 14.
Think of this as a musical valentine.

When 15-year-old Shay (portrayed by Daniel Huttlestone) hears the music of the Clash for the first time, it’s a revelation, opening up a new world of social consciousness and anti-establishment defiance beyond anything he’s known in his dead-end London suburb. After his father is injured in a work accident, Shay takes over driving his cab and one fateful night, picks up none other than Joe Strummer (Jonathan Rhys Meyers), the lead singer of the Clash. Drawn into the heart of the city’s burgeoning punk scene, Shay forges two relationships that will change his life, falling in love with rebellious cool girl Vivian (Nell Williams) and finding and unexpected connection with the Clash’s electrifying frontman.

Through being forced to take care of his family, his friendship with Strummer and his relationship with Vivian, Shay passes some important milestones on his way to adulthood.Propelled by a blistering soundtrack that bounces from the Clash to the Ramones to Buzzcocks, London Town captures the sound and spirit of a scene that shook the world. And lives on still.

The IFC Films theatrical release co-stars Natascha McElhone and Dougray Scott. It features the classic music not just of the Clash but of such other major artists as the Ramones, Buzzcocks, the Stranglers, Toots and the Maytals, Willi Williams and Stiff Little Fingers. It was an official selection of the BFI London Film Festival and the Los Angeles Film Festival.

IFC has a trio of must-see films coming to DVD in January. We provide the info and teaser clips; you provide the DVD player.

Dancer (available January 17)
Ukrainian-born Bad Boy of Ballet Sergei Polunin became the Royal Ballets youngest-ever principal dancer when he was just 19. But two years later, at the height of his success, he walked away from it all, resolving to give up dance entirely.

Steven Cantor’s Dancer tracks the life of this iconoclastic virtuoso, from his prodigal beginnings in the Ukraine to his awe-inspiring performances in the U.K., Russia and the U.S., where he went viral after David LaChapelle filmed him dancing to Hozier’s “Take Me to Church”. Beyond celebrating the raw talent and wild ambition of Polunin, whose sights are now set on Hollywood, Dancer considers how wealth and success may not be enough when it comes to finding personal and professional identity.

The Free World (January 17)
How hard would you fight to be free? After spending two decades in prison for a crime he didn’t commit, Mo (played by Boyd Holbrook) struggles to put his past behind him as he readjusts to a new life working in an animal shelter. Doris (Elisabeth Moss) is trapped in another sort of prison: an abusive marriage.

A dramatic encounter brings these two troubled souls together, and a possible murder connects them. Soon, Mo finds himself risking everything . . . including being locked up once again for someone else’s crime to protect the fragile Doris. Driven by explosive performances from Moss and Holbrook, the feature debut from director Jason Lew is a gripping, mood-drenched exploration of guilt, redemption, and what it means to be free. Academy Award winner Octavia Spencer and Sung Kang co-star.

Passage to Mars (January 24)
Before humans make it to Mars, they must conquer the Arctic. Passage to Mars is the incredible true story of six men who embark on a treacherous, 2,000-mile journey across the forbidding sea-ice of the Northwest Passagean alien voyage on planet Earth designed to prepare NASA astronauts for an eventual mission to Mars.

But as an expedition that was supposed to take weeks stretches into a two-year odyssey, the crew must overcome seemingly insurmountable challenges and life-threatening conditions if they hope to realize their dream of someday reaching the Red Planet. This breathtaking adventure features narration by Zachary Quinto and special guest voice appearances by Buzz Aldrin and Charlotte Rampling.
Blast off!

IFC Films offers an August filled with a trio of must-see, must-own films.

11 Minutes
In the span of 11 tense minutes, a whirlwind of interlocking tales of life in the surveillance age unfold in this stylish, propulsive thriller from acclaimed director Jerzy Skolimowski. In a city square in Warsaw, a sleazy film director “auditions” a married actress in a hotel room; a hot dog vendor goes about his work while concealing a dark secret; a drug runner has a tryst with a client’s wife; and a young man plots an ill-advised robbery.

Mixing sleek cinematography with footage from webcam, smartphone and CCTV cameras, 11 Minutes masterfully lays out the pieces of a puzzle and then brings them together in an explosive climax.
The IFC Films theatrical release, a winner of multiple prizes at the Venice Film Festival, Polish Film Festival and Lisbon & Estoril Film Festival, stars Richard Dormer, Paulina Chapko, Andrzej Chyra and Wojciech Mecwaldowski. “

Sky
In this captivating, star-filled road movie, a French woman finds liberation in the dusty highways, open spaces and smoky barrooms of the great American West. Diane Kruger stars as Romy, a Parisian who, while on vacation in California, breaks things off once and for all with her boorish husband (Gilles Lellouche) in a dramatic final fight.

Now a free woman in a strange land, Romy embarks on a life-changing trip through the desert, crossing paths with strangers who impact her life in various ways: a kindly small-town police officer (Joshua Jackson), a pregnant, trailer park-dwelling mother (Lena Dunham) and a charming, ruggedly independent cowboy (Norman Reedus), with whom she finds the possibility of new love. Beautifully capturing the landscapes and soul of the Southwest, Sky, an IFC Films theatrical release and an official selection at the Toronto International Film Festival, is a stirring emotional odyssey about what it means to start your life over again.

Weiner
Anthony Weiner was a young congressman on the cusp of higher office when a sexting scandal forced a humiliating resignation. Just two years later, he ran for mayor of New York, betting that his ideas would trump his indiscretions. With unprecedented access to Weiner, his family and his campaign team, the universally acclaimed flick is a thrilling look inside a political comeback-turned-meltdown. What begins as an unprecedented surge to the top of the polls takes a sharp turn once Weiner is forced to admit to new sexting allegations.

He desperately tries to forge ahead, but the increasing pressure and crippling 24-hour news coverage halt his political aspirations. With the city of New York as a loud and bustling backdrop, Weiner walks the line between political farce and personal tragedy as it plunges through an increasingly baffling campaign with unflinching clarity, humor and pathos. The IFC Films theatrical release won the U.S. Grand Jury Prize for documentary at the Sundance Film Festival.