How we love Stormy weather.
How we hate Adolph Frump.
He fucked Stormy Daniels. And She now fucks him. Hard.
St. Martin’s Press spotlights Stormy with Full Disclosure ($27.99), Stormy Daniels’ memoir. She and the book will really fuck the bastard:  The book will be published simultaneously in the UK, Australia, South Africa and India, and in hardcover, ebook and audio formats.

Nina Burleigh’s Golden Handcuffs (Gallery Books, $28) is a comprehensive and provocative account of the women who have been closest to Trump—his German-immigrant grandmother, Elizabeth, the uncredited founder of the Trump Organization; his Scottish-immigrant mother, Mary, who acquired a taste for wealth as a maid in the Andrew Carnegie mansion; his wives—Ivana, Marla, and Melania (the first and third of whom are immigrants); and his eldest daughter, Ivanka, groomed to take over the Trump brand from a young age. Also examined are Trump’s two older sisters, one of whom is a prominent federal judge; his often-overlooked younger daughter, Tiffany; his female employees; and those he calls “liars”—the women who have accused him of sexual misconduct.

Senator Bernie Sanders’ presidential campaign was a beginning, not an end. In his new book, Where Do We Go From Here: Two Years in the Resistance (St. Martin’s Press, $27.99), America’s most popular political figure speaks about what he’s been doing to oppose the Trump agenda and strengthen the progressive movement and how we go forward as a nation.

This is the man who should be handling the US, not the sick lying sex addict, homophobe, racist, xenophobe, misogynistic scumbag with fake orange hair.

Following a series of Top 10 hits that became instant American standards, the Weavers dissolved at the height of their fame. Wasn’t That a Time: The Weavers, the Blacklist, and the Battle for the Soul of America (Da Capo Press, $27) details the remarkable rise of Pete Seeger’s unlikely band of folk heroes, from basement hootenannies to the top of the charts, and the harassment campaign that brought them down.

Exploring how a pop group’s harmonies might be heard as a threat worthy of decades of investigation by the FBI, Wasn’t That a Time turns the black-and-white ’50s into vivid color, using the Weavers to illuminate a dark and complex period of American history. Using previously unseen journals and letters, unreleased recordings, once-secret government documents, and other archival research, Jesse Jarnow uncovers the immense hopes, incredible pressures, and daily struggles of the four distinct and often unharmonious personalities at the heart of the Weavers.

Before the emergence of prohibition-era gangsters Al Capone and Lucky Luciano, there was the Black Hand: An early twentieth-century Sicilian-American crime ring that preyed on immigrants from the old country. In those days, the FBI was in its infancy, and local law enforcement were clueless against the dangers—most refused to believe that organized crime existed. Terrorized victims rarely spoke out, and the criminals ruled with terror—until Inspector Frank Oldfield came along.

In 1899, Oldfield became America’s 156th Post Office Inspector—joining the ranks of the most powerful federal law enforcement agents in the country. Oldfield was finally able to penetrate the dreaded Black Hand when a tip-off put him onto the most epic investigation of his career, culminating in the 1909 capture of 16 mafiosos in a case that spanned four states, two continents—and ended in the first international organized crime conviction in the country.

Hidden away by the Oldfield family for one hundred years and covered-up by rival factions in the early 20th century Post Office Department, this incredible true story is told in Inspector Oldfield and the Black Hand Society: America’s Original Gangsters and the U.S. Postal Detective who Brought Them to Justice (Touchstone, $26) out of America’s turn-of-the-century heartland will captivate all lovers of history and true crime.

For more than ten 10 years, a mysterious and violent predator committed 50 sexual assaults in Northern California before moving south, where he perpetrated ten sadistic murders. Then he disappeared, eluding capture by multiple police forces and some of the best detectives in the area.

Three decades later, Michelle McNamara was determined to find the violent psychopath she called “the Golden State Killer.” Michelle pored over police reports, interviewed victims, and embedded herself in the online communities that were as obsessed with the case as she was. 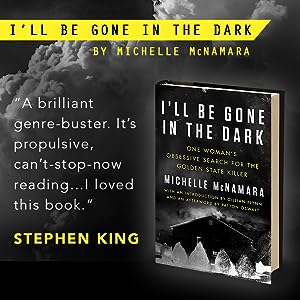 I’ll Be Gone in the Dark: One Woman’s Obsessive Search for the Golden State Killer (Harper,  $27.99)—the masterpiece McNamara was writing at the time of her sudden death—offers an atmospheric snapshot of a moment in American history and a chilling account of a criminal mastermind and the wreckage he left behind. It is also a portrait of a woman’s obsession and her unflagging pursuit of the truth. Utterly original and compelling, it has been hailed as a modern true crime classic—one which fulfilled Michelle’s dream: helping unmask the Golden State Killer.

Barking up the right tree: The hilarious, heartwarming and rebarkable true story of Guy the Beagle, Duchess Meghan Markle’s rescue dog, His Royal Dogness, Guy the Beagle: The Rebarkable True Story of Meghan Markle’s Rescue Dog (Simon & Schuster, $17.99).
Like all good stories, Guy the Beagle’s begins lost in the woods of Kentucky. But his fortunes change when he’s rescued by none other than Meghan Markle. Practically overnight, Guy goes from wags to riches. But does this backwoods beagle have what it takes to be welcomed into the royal family? Guy’s story of finding acceptance in an exceptional family will have readers of all ages barking with laughter.

In Homebody: A Guide to Creating Spaces You Never Want to Leave, (Harper Design, $40), Joanna Gaines walks you through how to create a home that reflects the personalities and stories of the people who live there. Using examples from her own farmhouse as well as a range of other homes, this comprehensive guide will help you assess your priorities and instincts, as well as your likes and dislikes, with practical steps for navigating and embracing your authentic design style. Room by room, Homebody gives you an in-depth look at how these styles are implemented as well as how to blend the looks you’re drawn to in order to create spaces that feel distinctly yours. A removable design template at the back of the book offers a step-by-step guide to planning and sketching out your own design plans. The insight shared in Homebody will instill in you the confidence to thoughtfully create spaces you never want to leave.

Dick Gregory has been an unsparing and incisive cultural force for more than fifty years: A friend of such luminaries as Dr. Martin Luther King Jr. and Medgar Evers, Gregory is an unrelenting, lifelong activist against social injustice, whether he was marching in Selma during the Civil Rights movement or organizing student demonstrations to protest the Vietnam War, participating in rallies for Native American and feminist rights or fighting apartheid in South Africa.Gregory’s Defining Moments in Black History: Reading Between the Lies (Amistad, $15.99) teaches readers how to laugh . . . and live.

The League of Regrettable Sidekicks: Heroic Helpers from Comic Book History (Quirk Books, $24.95) affectionately spotlights forgotten helpers like Thunderfoot (explosive-soled assistant to the Human Bomb), super-pets like Frosting (polar bear pal of space hero Norge Benson), fan favorites like Rick Jones (sidekick to half of the Marvel Universe), and obscure partners of iconic heroes (Superman Junior’s career barely got off the ground). Included are pernicious profiles of henchmen and minions, the sidekicks of the supervillain world. Casual comics readers and diehard enthusiasts alike will relish the hilarious commentary and vintage art from obscure old comics.

It’s a bit tough to talk (and write) about any Mary Higgins Clark book without spilling the beans. All the murders and mayhem and myriad of mysteries! here’s what we will tell you: You Don’t Own Me (Simon & Schuster, $26.99)is the perfect, exhilarating follow up to the bestselling Every Breath You Take. The “Queen of Suspense” Mary Higgins Clark and her dazzling partner-in-crime Alafair Burke have devised another riveting page-turner.

She is famous throughout the world, but how many know her name? You can admire her figure in Washington, Paris, London, New York, Dresden, or Copenhagen, but where is her grave? We know only her age, fourteen, and the work that she did—because it was already grueling work, at an age when children today are sent to school. In the 1880s, she danced as a “little rat” at the Paris Opera, and what is often a dream for young girls now wasn’t a dream for her. She was fired after several years of intense labor; the director had had enough of her repeated absences. She had been working another job, even two, because the few pennies the Opera paid weren’t enough to keep her and her family fed. She was a model, posing for painters or sculptors—among them Edgar Degas.

Drawing on a wealth of historical material as well as her own love of ballet and personal experiences of loss, Camille Laurens’Little Dancer Aged Fourteen: The True Story Behind Degas’s Masterpiece(Other Press, $22.95) presents a compelling, compassionate portrait of Marie van Goethem and the world she inhabited that shows the importance of those who have traditionally been overlooked in the study of art.

When Marie Colvin was killed in an artillery attack in Homs, Syria, in 2012, at age 56, the world lost a fearless and iconoclastic war correspondent who covered the most significant global calamities of her lifetime. In Extremis (Farrar, Straus and Giroux, $28), written by her fellow reporter Lindsey Hilsum, is a thrilling investigation into Colvin’s epic life and tragic death based on exclusive access to her intimate diaries from age thirteen to her death, interviews with people from every corner of her life, and impeccable research. A devastating and revelatory biography of one of the greatest war correspondents of her generation that must be read.

When he buys a beach house on the Carolina coast, David Sedaris envisions long, relaxing vacations spent playing board games and lounging in the sun with those he loves most. And life at the Sea Section, as he names the vacation home, is exactly as idyllic as he imagined, except for one tiny, vexing realization: it’s impossible to take a vacation from yourself.

With Calypso, (Little, Brown & Company, $ 28) Sedaris sets his formidable powers of observation toward middle age and mortality. Make no mistake: these stories are very, very funny–it’s a book that can make you laugh ’til you snort, the way only family can. Sedaris’s powers of observation have never been sharper, and his ability to shock readers into laughter unparalleled. But much of the comedy here is born out of that vertiginous moment when your own body betrays you and you realize that the story of your life is made up of more past than future.