First of all, kudos. applause, standing ovations and general huzzahs to VAI, otherwise known as Video Artists International. While other video companies are bragging about their release of a “lost” film such as Dracula and Frankenstein meet Ma and Pa Kettle and Have Ugly Children, VAI is releasing the wonderful Max Liebman television musical spectaculars from the ’50s.

Witness Lady in the Dark: a lost classic that maybe should remain lost, except for the VAI TV release. Some years ago, a college in Boston produced an uncut version of the Broadway show, partially paid for by the author’s widow, Kitty Carlisle Hart. It ran three hours and heavy change.  Forty minutes of music which, given Kurt Weill’s score, gave the audience more than two hours of Moss Hart dramatizing psychoanalyses.

Just as eyes were beginning to glaze over, the show’s sequences illustrating psychoanalysis in dream form had the stage become electric with the Weill score . . . only to saunter back into  Fun with Freud.  Finally, a fourth dream, The Childhood Dream, wraps everything up nicely with the beautiful song, “My Ship.”  Even if Gertrude Lawrence, the original lead, were alive, it would take a Herculean effort to make this work today.

Then there was the 1944 Mitchell Liesen film with Ginger Rogers, which today plays like a particularly vivid acid trip in an ’80s gay bar.
Then, at last, Max Liebman did a TV version in 1954, which VAI has released on DVD.  It stars Ann Southern, a very underestimated comedienne with a fine singing voice.  Having neither the somewhat chilly affectedness of Gertrude Lawrence nor the brassy colorfulness of Ginger Rogers, here is a leading lady we can believe. The whole thing come in at 90 minutes, with the Weill score more or less intact. 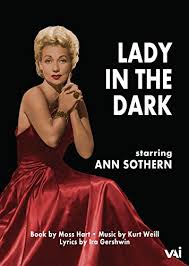 Both Weill and Lawrence were geniuses, although Lawrence ages poorly.  Moss Hart had a tendency to write frequently in an autobiographical vein; think of The Man who Came to Dinner and Light Up the Sky. He also used his own extensive couch time to create Lady in the Dark, clocking in some 400 performances during its original Broadway run. However, the show is cloyingly long if performed uncut today.
But the Liebman take is transcendent, not only because of Southern, but also James Daly, Carleton Carpenter and, of course, Bambi Lynn and Rod Alexander, who seem to dance in all of Liebman’s TV shows.
“My Ship”, “The Saga of Jenny” , “One Life to Live” there all here.  This is a difficult thing to say, but Lady in the Dark may well be the best of all the VAI releases.