Save the date and save some of the loot Santa stuffed into your stocking, so there won’t be a problem of nabbing a copy of the inspirational mixed martial arts action film, Born a Champion.  The flick fights its way into select theaters, on Digital, and On Demand January 22 from Lionsgate. The film will also be released on Blu-ray and DVD on January 26. Starring Emmy winner Sean Patrick Flanery, Katrina Bowden and Golden Globe nominee Dennis Quaid, Born a Champion was directed by Alex Ranarivelo and written by Sean Patrick Flanery and Ranarivelo.
This powerful  action film focuses on the love for family and the drive for greatness. After a blood-soaked Jujutsu match in Dubai, fighting legend Mickey Kelley (Flanery) falls to superstar Blaine. But years later, an online video proves that Blaine cheated, and the world demands a rematch. Can the aging underdog get back into shape in time to vanquish his foe, get revenge, and claim his prize?
More good news from Film Movement: They have unveiled (and released on DVD) Mr. Topaze, Peter Sellers’ long-lost 1961 directorial debut, newly-restored in 2K from the last surviving 35mm print held in the BFI National Archive.

Albert Topaze (played by Sellers), a poor but proud French schoolmaster, loses his job after he refuses to alter the failing grades of one of his students. Seizing the opportunity to exploit his honesty, actress Suzy Courtois (Nadia Gray) convinces her lover, the corrupt city council member Castel Benac (Herbert Lom), to hire Topaze as a managing director for one of his shady businesses.

Sellers‘ lone directorial effort, Mr. Topaze displays the British comic genius at the peak of his powers alongside his future Pink Panther nemesis Herbert Lom and a stellar supporting cast that includes Leo McKern, Billie Whitelaw and Michael Gough. Long considered a “lost” classic, MR. TOPAZE was digitally restored in 2K from the last surviving 35mm prints held in the BFI National Archive.
In his newly-written essay included in the Film Movement Classics release, Roger Lewis, author of The Life and Death of Peter Sellers writes: “In my opinion we are only now beginning to wake up to Sellers‘ unique qualities as a performer, and the rediscovery of Mr. Topaze will aid this reassessment. It is a film of which Jacques Tati might be proud. It is as good as any of the later Chaplin efforts, Limelight or A Countess from Hong Kong. It is a scandal that it was lost for so long.”
BONUS FEATURES
Someday Santa will make one of our Bucket List dreams possible: To meet the brains behind Cohen Film Collection and thank the geniuses for their output of great films on Blu-ray.
The latest gem: The Buster Keaton Collection: Go West & College. Both flicks have been restored to their luster and laughter. 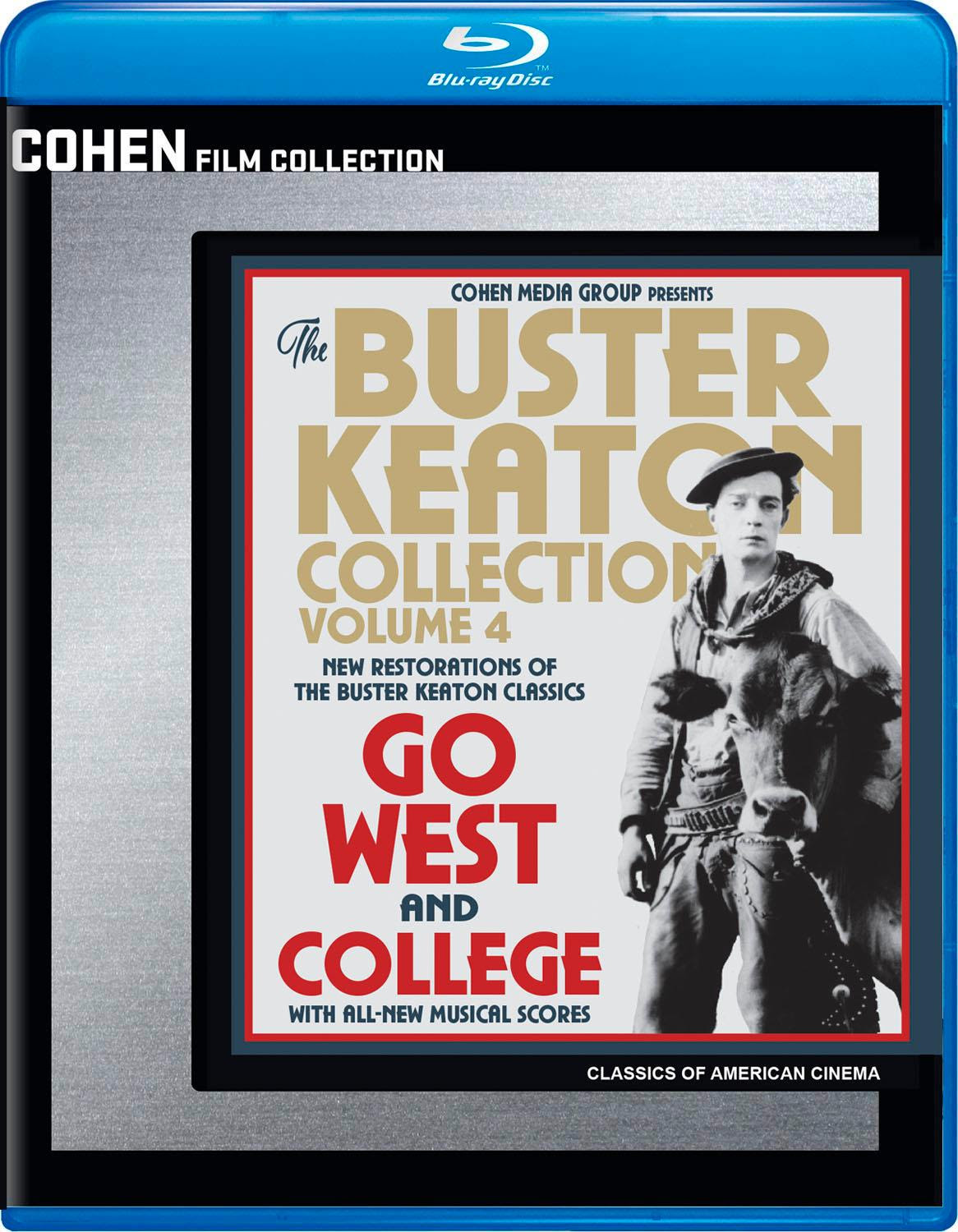 GO WEST
Heeding the expansionist call of Horace Greeley, an idealistic young man (though aptly named “Friendless”) hops a freight train westward to meet his destiny, first in a teeming metropolis—where he is roundly trampled by rush-hour foot traffic—then into the ranch lands of Arizona. His attempts at bronco busting, cattle wrangling, and even dairy farming all end in hilarious failure, but when a trainload of steer are unleashed on the streets of Los Angeles, “Friendless” decides to undertake an unorthodox, single-handed round-up.
COLLEGE
Keaton’s ode to varsity life demonstrates the performer’s trademark brand of visual comedy as well as his remarkable agility. He stars as Ronald, a small-town, academically-inclined freshman who applies his wiry physique to a series of sports, in order to impress a fellow student (played by Anne Cornwall). He seems destined for failure, but when Mary is accosted by an overzealous rival (Harold Goodwin), Ronald discovers within himself an untapped wellspring of athleticism.

The first time I watched Jack Palance torment Joan Crawford, I was hit with a case of Sudden Fear.  I wanted to join Joan in the closet and watch the wind-up toy getting closer . . .

On January 12, Cohen Film Collection released this rediscovered masterpiece of film noir on DVD. Crawford plays a successful playwright who marries a less than stellar actor (Palance) with a troubling secret.

She soon discovers that he not only married her for her money but that he plans to murder her with the help of his lover (played by Gloria Grahame) in a performance The New York Times hailed as “hard, brash and sexy”.  This taut thriller, featuring a score by Elmer Bernstein, that is sure to keep you on the edge of your seat.

For the first time,  Arnold Schwarzenegger and Jackie Chan face off against each other in the epic fantasy-adventure Iron Mask, premiering everywhere on Digital and On Demand November 20 and on Blu-ray and DVD November 24 from Lionsgate.

In order to save his homeland from certain doom, a kung fu master (Chan) must escape from the maniacal James Hook (Schwarzenegger) in order to send his daughter a secret talisman that will allow her to control a massive and mythical dragon.  This larger-than-life, globe-trotting tale–ranging from the impenetrable Tower of London to the fabled Silk Road and China’s Great Wall–also stars Rutger Hauer in one of the screen icon’s final performances.

And thought this was a holly jolly Christmas. A lethal creature hides in the woods that surround a suburban neighborhood and kills anyone who comes near it in Dragon Soldiers, arriving on DVD, Digital and On Demand December 15 from Lionsgate.

When locals start vanishing from a small Colorado town, the mayor hires a squad of elite mercenaries to fight off the menace—whoever or whatever it may be. Leader Cameron (played by Ruben Pla) and his team suspect a ruthless gang of mercenary survivalists . . . until they come face to face with a massive, airborne, fire-breathing reptile. Now, stopping the creature and surviving the attacks will take weapons, explosives, and gunfire, along with every ounce of courage they have left.
Happy Holidaze!

There’s nothing quite like an outrageous, raunchy comedy.  Hard-partying and out-of-control situations run amok in Guest House, a star-studded, who’s who of comedic actors and social-media influencers.  Pauly Shore and Steve-O  kick this flick, moving in on Blu-ray (plus Digital) and DVD on November 10 from Lionsgate.

When engaged couple Sarah (Aimee Teegarden) and Blake (Mike Castle) buy their dream home, there’s a catch: A party animal named Randy (Shore) in the guest house who refuses to leave. When Randy throws a wild, sexy pool party, the cops show up, and Blake gets arrested. Can he and Sarah get through their backyard wedding without a certain loser crashing the party—and ruining their marriage?

Is it an American Dream or a nightmare?
Michiel Huisman, Luke Bracey and Nick Stahl star in the flick, arriving on DVD, Digital and On Demand January 12 from Lionsgate. Steven Spielberg’s longtime cinematographer, Academy Award-winning cinematographer Janusz Kaminski, directs the intense crime-thriller about the brutal struggle for success.
Desperate for cash, entrepreneurs Scott (Bracey) and Nicky (Huisman) turn to Russian mobster Yuri (Stahl). After they refuse the funding he offers, Yuri gets revenge by trying to take over their construction project. The partners are terrified, until Nicky’s tough Russian girlfriend, Ana, decides to take action herself.
No, we’re not dreaming.
Is there anything scarier than Heir Adolf Frump, aka The Worm, aka Trumpty Dumpty?

On Christmas Eve, an innocent couple become hosts to a malicious entity. Throughout the night they proceed to terrorize a family of five in unimaginably violent and disturbing ways. But these demonic possessions won’t end with this unfortunate family; they mark just the beginning of a horrific worldwide epidemic.

Beneath its nerve-jangling suspense, the film offers a dark and bloody insight into how lying to your loved ones can not only alienate them, it can completely destroy your bonds with them forever.

The film, written by Adam Leader and directed by Adam Leader and Richard Oakes, follows in the footsteps of classic successes such as The Exorcist, The Texas Chainsaw Massacre, Invasion of the Body Snatchers, and Inglorious Basterds. Hosts was written to keep viewers on the edge of their seats and leave a lasting impression.
We’ve warned you.
If you’ve ever had to privilege to see Rudolf Nureyev perform, the memories of his movements and motions will stay with you until your last breath.
Relive the magic again with I am a Dancer, the intimate 1972 documentary portrait, which offers an unprecedented look at the training and dedication behind his electrifying art.

Providing a unique glimpse into Nureyev’s personality, preparation and technique, the documentary includes excerpts from his performances in the classical ballets La Sylphide with Carla Fracci, and The Sleeping Beauty with Lynn Seymour; in addition to sequences from the modern ballet Field Figures with Deanne Bergsma, and Frederick Ashton’s Marguerite and Armand with his long-time partner Margot Fonteyn.

Film Movement has taken a most welcome leap by releasing this Golden Globe Nominee for Best Documentary Film Features  on Blu-ray for the first time in North America.