Johnny Carson defined late-night television.  For more than 30 years, America watched together, laughed together, and sang together on the couch with the Original King of Late Night.

Now, audiences will be able to enjoy the very best of late night, any night, with The Tonight Show Starring Johnny Carson: The Vault Series (Time Life). The singular collections, new to retail and available in multiple configurations, feature Johnny and the inimitable Tonight Show crew in full episodes fresh from Carson’s vaults, including commercials. The Vault Series gives viewers the opportunity to relive the incomparable magic of a night with Johnny, Ed and Doc.  These collections feature some of the best and most requested episodes from more than 30 years and 4,000 shows, including material not seen by the public since the original broadcasts.

Rex is a cab driver who has never left the mining town of Broken Hill in his life. When he discovers he doesn’t have long to live, he decides to drive through the heart of the country to Darwin,

where he’s heard he will be able to die on his own terms; but along the way he discovers that before you can end your life you’ve got to live it, and to live it you’ve got to learn to share it. Share the ride with Last Cab to Darwin (First Run Features). 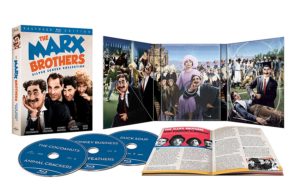 The collectible set, filled with unforgettable comedy sketches, musical numbers, witty dialogue and plenty of gags, also includes all-new bonus features (such a feature-length documentary on the rise of the Marx Brothers) and audio commentaries for all the films.

To commemorate the 100thanniversary of Gregory Peck’s birth, Gregory Peck Centennial Collection (Universal Studios Home Entertainment) features two of the actor’s most iconic roles in To Kill a Mockingbird and Cape Fear.

Sure to lift any “Fanshee” out of the doldrums, the 3-disc Banshee: The Complete Fourth Season (HBO) is  this action drama charts the final twists and turns that follow Lucas Hood, an ex-convict who assumed the identity of sheriff in the Amish-area town Banshee, where his former lover and partner-in-crime was living under her own alias, Carrie Hopewell. The final season set is packed with behind-the-scenes extras including audio commentaries, exclusive deleted scenes, episode recaps,

“Banshee Origins” (which tells the story behind the story with eight prequel videos featuring the cast of Banshee), “Zoomed In Episodes 1- 8” (an on-the-set feature highlighting how key, adrenaline-filled scenes were created), and specially-created cast retrospectives on “Best Fight Scenes” and “Job’s Best Outfits.”

Cohen Media Group continues to amaze cinephiles with their restored, spectacular releases. This year’s tops: Two Films By Douglas Sirk. The set features A Scandal In Paris, starring George Sanders is at his debonair best as we see him climb from clever criminal through the ranks of French society in the early 1800’s, with seemingly nothing to stop him from the biggest heist of his career . . . except, perhaps, the charms of a young lady. The other feature is Lured.

A serial killer is on the loose in London, luring young women into his web through ads placed in the personal column.  Scotland Yard’s bait to ensnare the villain is a young American dance hall girl (played by a stunning Lucille Ball), who encounters a series of likely suspects, including the always dashing George Sanders as a sophisticated playboy and an unforgettable Boris Karloff as a mad fashion designer.
Then there’s Sudden Fear. In this rediscovered masterpiece of film noir, Joan Crawford plays a successful playwright who marries a mediocre actor (Jack Palance) with a troubling secret. She soon discovers that he not only married her for money but that he plans to murder her with the help of his lover (Gloria Grahame).

This taut thriller also features a score by Elmer Bernstein that is sure to keep you on the edge of your seat.

Directed by two-time Academy Award winner Barbara Kopple, Hot Type: 150 Years of The Nation (First Run Features) is a vivid look at America’s oldest continuously published weekly magazine. Centered through editor Katrina vanden Heuvel, as well as an impressive array of passionate writers, the film is a journey into the soul of American Journalism.

With unfettered access and unfiltered honesty, Hot Type captures the day-to-day pressures and challenges of publishing a weekly magazine and illuminates how the past continuously ripples through and shapes current events. It is the story of The Nation-and the nation-evolving into the future as it is guided by its remarkable past.

It’s easy to name the HBO drama that has consistently been the top selling TV on DVD/BD for the past five years. Now fans can get the most recent season with Game of Thrones: The Complete Sixth Season (HBO Home Entertainment).

The set features all 10 episodes, plus extensive bonus content. The cover is the best!

Disney’s adventure The Lion Guard (Disney) continues with Simba and Nala’s (from the classic The Lion King) second-born cub, Kion, and his Lion Guard team as they protect the Circle of Life! Follow our group of unlikely heroes: Bunga the honey badger, Fuli the cheetah, Beshte the hippo and Ono the egret. Join this heroic band as they use their unique abilities to protect the Pride Lands and maintain the Circle of Life. This series also features Simba, the spirit of Mufasa and the hilarious antics of Timon and Pumbaa.  You’ll go wild for all the ferocious fun, because whether the Lion Guard team is tracking a rogue leopard, foiling tricky jackals or facing stubborn crocodiles,

Life In The Pride Lands is always “hevi kabisa”  totally intense! This new DVD, features five new episodes and is packed with laughs, music, beloved characters and heart, The Lion Guard: Life in the Pride Lands is a must-own. Bring home this heroic adventure on January 10. C’mon, Santa gave you $ in your stocking!

Poetic, riveting and moving, three-time Academy Award nominee Carlos Saura’s latest foray into the music of Argentina (First Run features) explores the heart of traditional Argentine folklore and its stunning musical heritage, from traditional styles to modern dance. Now 84, the legendary director states: “By beginning with the most beautiful traditional songs, I wish to explore the deep, telluric connection between song and soil, tradition and the future.

I will create a film that is not only for aficionados but for all lovers of music and dance – as well as those who especially liked Carmen or Tango. My desire is to create a cinematic experience unlike any other.” Ole!

Time Stand Still (Rounder) This feature-length documentary film chronicles the final major tour for legendary rock band Rush. It is an intimate view of a historic moment from the perspective of the band, their fans, crew and management. Featuring interviews with the band throughout their sold-out 2015 40th Anniversary tour, the film also shows rarely seen backstage footage capturing the final moments of life on the road. Encore!